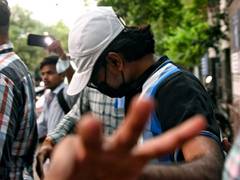 New Delhi (India): A team of Police officials of the Anti-Narcotics Cell, Dwarka nabbed four women drug peddlers from Indira market, Najafgarh on Wednesday and recovered 6.47 kg of cannabis and four mobile phones from their possession.

According to the information, the Anti-Narcotics Cell received secret information that some women sell drugs at the Indira market near Anaj Mandi, Najafgarh. After which police laid down a trap to catch the suspicious women peddlers, later they were apprehended by the team. During the search, large quantities of illicit cannabis were recovered from their possession. During the initial interrogation, they disclosed their identity as Neelam (35), Sunita (35), Neeta (34) and Savitri (34). All are residents of the Najafgarh area of Delhi.

A case has been registered at PS Baba Haridas Nagar, New Delhi, under the relevant sections of the Narcotic Drugs and Psychotropic Substances (NDPS) Act.
Further investigation is under process to nab the main supplier.