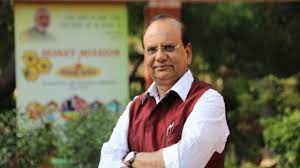 Prakash Chandra Thakur posted as deputy secretary in the chief minister’s office, Vasant Vihar SDM Harshit Jain, and Vivek Vihar SDM Devender Sharma was suspended and disciplinary proceedings were ordered against them, according to an official statement.

The LG had on Monday also suspended two assistant engineers of the Delhi Development Authority (DDA) after finding lapses in the construction of EWS flats in Kalkaji Extension.

Last week, the LG chaired a meeting to review the law and order situation of the national capital, in which, he was briefed about the current law and order scenario, crime data analysis, preventive measures, major challenges, reforms or initiatives undertaken and their impact by the Delhi Commissioner of Police.

LG appreciated the steps taken by Delhi Police especially the separation of law and order from investigation and integration of PCR at the Police Station level, initiatives for women’s safety, skill training through YUVA etc.

He emphasised ensuring timely and proper investigation of the cases with a special focus on the collection of scientific evidence thus enhancing the conviction rate and thereby reinforcing the deterrent effect of law.

While stressing the importance of public outreach and community policing, the Lt. Governor emphasised on public hearings in the localities to facilitate redressal of public grievances.

The LG also stressed on regular training of police personnel to improve their soft skills. He laid special emphasis on enhancing welfare measures for police personnel including resolution of outstanding matters of pension and gratuity.

Saxena also advised that the Delhi Police Housing Corporation be further strengthened in order to enhance the satisfaction of police personnel as regards housing facilities.