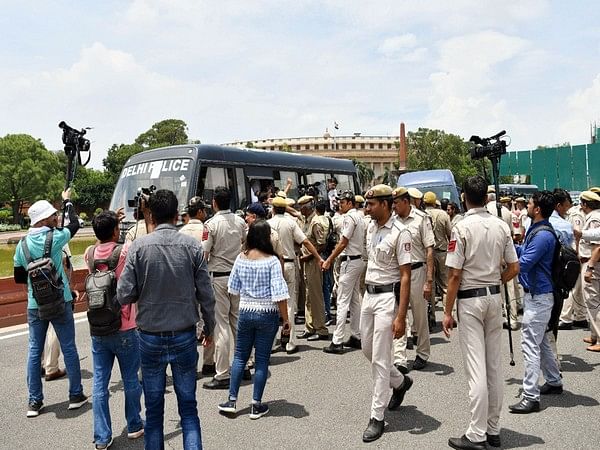 New Delhi [India]: Delhi Police have denied permission to the Popular Front of India (PFI) to hold a rally which was scheduled to be held on Saturday in the national capital.

Notably, the PFI was scheduled to hold a rally– “Save the Republic” at Ambedkar Bhawan in the Jhandewalan area of New Delhi. This comes following the letter written by the Vishva Hindu Parishad (VHP) to the Delhi Police requesting them to stop the rally organized by PFI in the national capital.

In the letter which was written to the Delhi Police on July 29, VHP leader Surendra Kumar Gupta claimed that the PFI has been running suspicious activities across the country and they should not be allowed to hold any rally in Delhi.

In his letter to the Delhi police, Surendra Gupta said in Hindi, “On July 30, 2022, at around 2:30 PM, PFI is organising a programme at Ambedkar Bhavan. This organization is running suspicious activities across the whole country. The investigation of its involvement behind many violent incidents in the country is going on in many states. On the occasion of Independence Day, such activities can spoil the atmosphere in the capital”
Another VHP leader Vinod Bansal retweeted the letter on his Twitter handle and wrote, “VHP will never allow the anti-national activities of #PFI. We have sent letter to @DelhiPolice @CPDelhi to stop it immediately.”

Earlier on July 7, the BJP’s Telangana unit called for the ban of the Popular Front of India following the arrest of four of its leaders in Nizamabad and urged the Union Ministry of Home Affairs to ban the “radical organization”, citing recent arrests and subsequent confessions by the suspects, that PFI has been actively radicalizing Muslim youth for years.

“The PFI agenda confessed by the arrested suspects to the police is extremely unsettling and dangerous to the religious harmony and social integrity of this nation. These radicals admitting that they have been training hundreds of youth against Hindu community, is a serious plot to destabilise the society,” BJP’s chief spokesperson K Krishnasagar Rao has said.