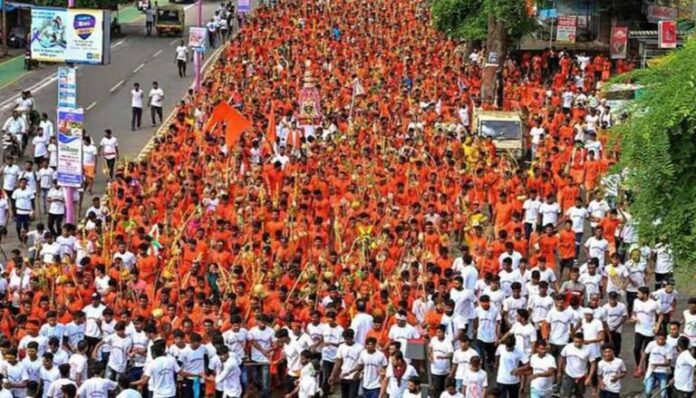 New Delhi [India]: Delhi Police have made elaborate security arrangements ahead of the ‘Kanwar Yatra’, which will commence on July 14.

According to police, a large number of Kanwariyas reach Delhi and some of them go to Haryana and Rajasthan via Delhi borders. A large number of Lord Shiva devotees would be undertaking “Kanwar Yatra” from Gaumukh, Gangotri Dham, Rishikesh and Haridwar. This year the expected number is about 15-20 lakh. Delhi Traffic Police has made elaborate arrangements to segregate the movement of Kanwarias and other road users and to minimize inconvenience to the general public and devotees from July 14 to July 26.

The Kanwariyas will enter East District from Maharajpur and Gazipur check post side and will leave Delhi for their respective destinations. East Delhi will be a transit point on route for kanwariyas hailing from different states like Haryana, Rajasthan and others.

The Police said that the Kanwariyas are expected to pass through Delhi on foot from July 14 onwards to their destinations and their movements would increase in subsequent days after July 21.

For smooth flow of traffic during Kawar Yatra, a total of 1,925 police personnel are being deployed for traffic regulation, and more than 56 cranes and motorcycles are also deployed on main roads and stretches from where the pilgrims pass, a release said.

If any devotee or member of the public wants to know any information related to traffic, he may approach the Delhi Traffic Police Facebook page, Twitter [email protected], Whatsapp number 8750871493 and helpline number 1095/011-25844444.

“Updated information at these platforms is available on a 24×7 basis. The devotees and road users are advised to follow the traffic rules and obey the directions of policemen on duty. During this period of Kanwarias movement, traffic violations will be checked by on-the-spot prosecution and by photography/videography of violations which will be followed by prosecution,” the police said.

In addition to these important roads and intersections, Kanwarias movement is observed in smaller numbers in several locations all over Delhi.

Heavy transport vehicles will be diverted by the Uttar Pradesh Police from Mohan Nagar towards NH-24 and no such traffic will be allowed towards Wazirabad road via Bhopra and/or towards GT Road via Apsara Border, the police said.

Heavy commercial transport vehicles, except city buses, coming from GT Karnal Road at Outer Ring Road will be diverted straight towards NH-24 and will not be allowed to move on Wazirabad Road and GT Road towards Shahdara. The police announced some other diversions.

During these days due to the movement of Kanwarias and the setting up of “Kanwariya Camps” on roadsides, traffic congestion/obstruction is experienced at several places.

Police advised the Kanwar camp organisers to ensure that they get prior permission from the competent authority for setting up of “Kanwarias Camp” and ensure that their camp does not hamper the free flow of traffic on the main carriageway.

In order to ensure a smooth transition of Kanwar Yatris as well as to maintain law and order in the East District, extensive security arrangements have been put in place.

Maximum police personnel of East District will be on the ground for these arrangements aimed to prevent any kind of disturbance, to maintain proper law and order at and around the camps as well as on the routes to be followed by Kanwariyas and also to ensure smooth passage for Kanwariyas with minimum inconvenience to the general public.

Sixteen camps are being set up in the East district for Kanwariyas.

Police personnel have also been directed to ensure proper barricading, lighting, and fire safety measures, and to maintain a register to record the entry and exit of each Kanwariya.
“Provision of CCTVs is also being made in the camps in coordination with the civic agencies.

Apart from it, all anti-terrorism measures have also been put in place. Anti-sabotage checks will be conducted at all 16 camps on a regular basis, morchas, and machans are also being set up to this regard. Quick Response Teams and MPVs have been deployed at sensitive locations on the route as well at the camps,” said police.

With a view to maintaining communal harmony in the area during Kanwar Yatra, meetings with the members of Aman Committees, religious leaders and respectable of the area have also been conducted in both districts.