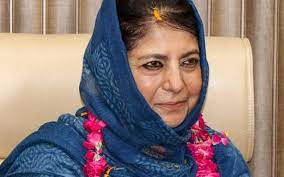 Kashmir (Jammu and Kashmir): Hours after Peoples Democratic Party president Mehbooba Mufti raised questions over the killing of terrorist Showkat Ahmad Sheikh, Jammu and Kashmir Police on Saturday said that they have already shared a detailed note on June 20 encounter in which the latter got neutralised and his involvement in terror-related activities.

“We have already issued a detailed press note of the #encounter on 20th June, in which #terrorist Showkat along with 03 foreign terrorists got #neutralised. Besides, his involvement in # terror-related activities was also shared. @JmuKmrPolice,” Kashmir Zone Police tweeted.

This came after Mehbooba raised questions over the killing of Showkat Ahmad Sheikh, in custody, whom police said was a militant and was killed in an encounter in Kupwara on June 20.

Mehbooba also appealed to the youth in the union territory to shun violence and refrain from “picking up guns”. “I request youngsters and parents to stop youth from picking guns. They (forces) get money by killing you. I request them to stop picking guns,” said Mufti while addressing reporters here.

On June 20, seven terrorists, including an arrested terror suspect, were killed during three separate encounters with the security forces.

According to police, four terrorists, including Showkat Ahmad Sheikh who was arrested on terror charges, were killed during an encounter in the Lolab area of the Kupwara district.
Police had said that Showkat Ahmad Sheikh, a resident of Sedow village in Shopian district, was arrested along with another accused for their involvement in an IED blast on June 2.

According to the press note, terrorist Showkat was the mastermind behind the IED blast in a private vehicle at Sedow Shopian in which one soldier was martyred and others injured.

During his interrogation, it was revealed that he used to ferry terrorists and arms or ammunitions from Lolab to Shopian. In Kupwara, he himself revealed sensitive information related to terrorists operating in Lolab valley, the press note further read.Share