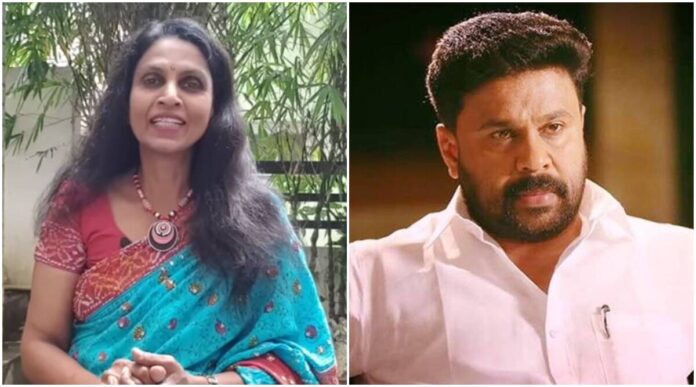 Thiruvananthapuram (Kerala): Former DGP R Sreelekha IPS claimed that actor Dileep is innocent in the actor assault case. “I’m 100 per cent certain that Dileep is not involved in this case. I don’t believe that knowingly or unknowingly he has any role in it,” Sreelekha said at the end of her 40-minute video.

She also alleged that the photo of Dileep with Pulsar Suni is ‘photoshopped’.
Another evidence of tower location, she said that day there was a programme in that hall. There were many actors and their drivers. There is no evidence to prove that Dileep and Pulsar Suni are together.

T Sreelekha added that she knew all this because she worked 12 years in Ernakulam as a DIG and IG.

A few female actors close to her had told her that this person (Pulsar Suni) had befriended them, became their driver, abducted them, shot their videos and blackmailed them. They had settled the issue by paying money.

Last month, a trial court has dismissed the plea of the prosecution seeking to cancel the bail granted to actor Dileep in the 2017 actress assault case.

The prosecution argued that Dileep, who is the eighth accused in this case, has influenced the witnesses and tried to tamper with the evidence.

The prosecution further claimed that they have the evidence to prove this. But the court today dismissed the plea.

The survivor actress, on May 23, had approached the Kerala High Court seeking its intervention in the case to ensure justice and alleged that a move is being made to subvert the case.

In her plea, she alleged, “It is an attempt to influence the politicians in the ruling alliance to end the case. Despite the evidence that accused actor Dileep’s lawyers were trying to influence witnesses, they were excluded from the investigation by the probe team. It was informed that a move was being made to end the case in a hurry. This raises the question of whether this will lead to denial of justice.”

Earlier on May 24, the Kerala Communist Party of India (Marxist) secretary Kodiyeri Balakrishnan had said that the plea filed by the survivor actress in the 2017 actress assault case was mysterious and allegations raised by her against the state government were baseless.

Dileep is the Malayalam actor who has been the eighth accused in the case apart from Sunil Kumar, Martin Antony, Manikantan, VP Vijeesh, Salim, Pradeep, and Charley Thomas.

The case pertains that an actress, who worked in Malayalam, Tamil and Telugu films, was allegedly abducted and molested inside her car by a group of men who had forced their way into the vehicle on the night of 17 February 2017.