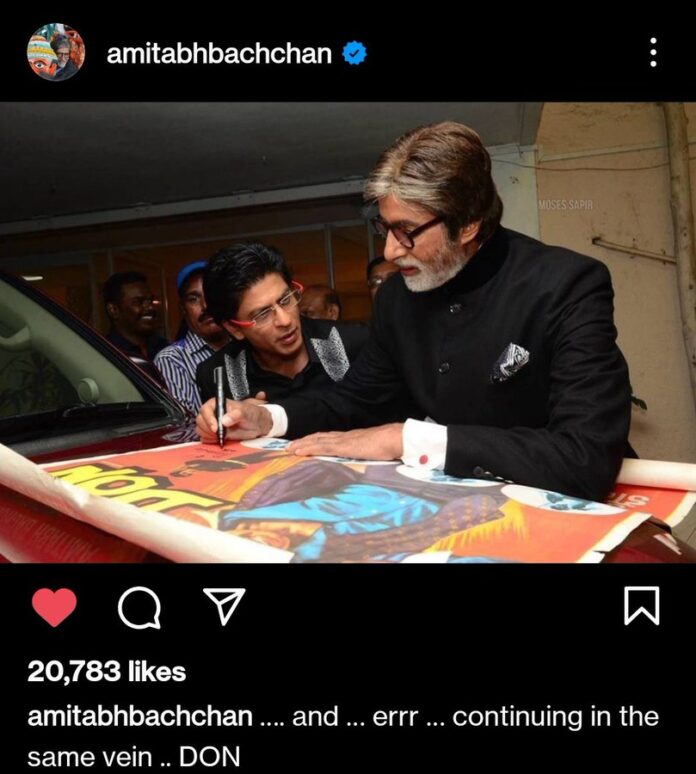 Mumbai (Maharashtra): Megastar Amitabh Bachchan, with his recent picture on Instagram, hints at the biggest crossover in Bollywood, fans assume that the actor might be a part of Shah Rukh Khan’s Don 3.

On Saturday, the ‘Sholay’ film actor went down his memory lane and shared a throwback picture featuring Shah Rukh Khan.

In the picture, the megastar can be seen signing up the vintage poster of his action thriller film ‘Don’, while Shah Rukh Khan gives him a look.

Sharing the throwback picture, the actor captioned, “…. and … errr … continuing in the same vein .. DON”.

Soon after the post was shared by the actor, fans started to assume that this might be the biggest crossover in the history of Bollywood as they could see both on-screen ‘Don’s’ together, and the fans swamped the comment section with excitement.

“Is that any hint on Don 3?” a user tweeted sharing the picture

Recently, there were rumours that director Farhan Akhtar, who announced his upcoming film ‘Jee Le Zara’ starring Priyanka Chopra, Alia Bhatt and Katrina Kaif has kept the film on the back burner and is currently working on a new project.

The megastar’s post then fuelled up the speculations that the ‘Dil Chahta Hai’ director is working on the much-anticipated film ‘DON 3’ for which the fans have been waiting for a very long time.

Previously, Amitabh Bachchan and Shah Rukh Khan had worked together many times in the films like ‘Mohabbatein’ and ‘Kabhi Khushi Kabhi Gham and will also be seen in the forthcoming film ‘Brahmastra’.

An official announcement of ‘Don 3’ is still awaited and fans are eagerly waiting to see King Khan in the ‘Don’ avatar once again.

Ban On Single-Use Plastic Comes Into Effect From Today

US: 9 Injured In Shooting In Newark