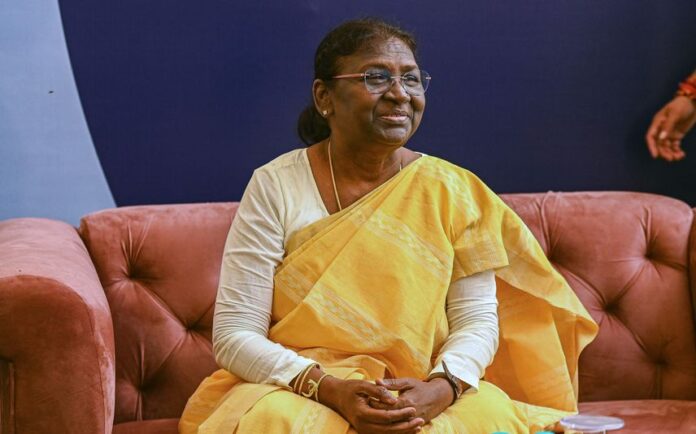 New Delhi [India]: President-elect Droupadi Murmu, who hails from the tribal community, will take oath as the 15th President of India on Monday.

On July 22, the former Jharkhand governor Murmu registered a historic win over her rival Yashwant Sinha in the Presidential election, becoming the first woman tribal candidate and the second woman in the country to occupy the highest office in the country.

The NDA’s presidential candidate Droupadi Murmu was officially declared as the 15th President of the country after the conclusion of the counting of votes on Thursday.
Murmu received 2,824 votes with a value of 6,76,803 while her opponent Yashwant Sinha secured 1,877 votes with a value of 3,80,177. A total of 4,809 MPs and MLAs cast their votes in the polling that took place on July 18.

Secretary General of Rajya Sabha and the Returning Officer for Presidential Election 2022, PC Mody handed over the certificate to President-elect Droupadi Murmu at her residence in Delhi.

Soon after the completion of the third round of counting, Prime Minister Narendra Modi and BJP president JP Nadda met Murmu at her residence in the national capital and extended greetings for her victory.

Prime Minister Narendra Modi congratulated Droupadi Murmu on her election as new President of the country and said she has emerged as a ray of hope for citizens, especially the poor, the marginalised and the downtrodden.

Outgoing President Ram Nath Kovind also extended his best wishes to Droupadi Murmu who will succeed him in the highest office of the country. Wishes poured in from the political fraternity across party lines on the victory of Murmu who will be India’s first tribal president.