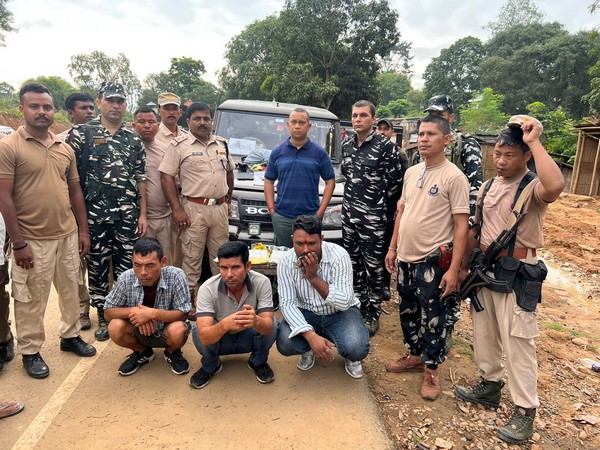 Karbi Anglong (Assam): In a joint operation with the Central Reserve Police Force, the Assam Police on Tuesday recovered a huge quantity of narcotic drugs worth Rs 15 crore in Assam’s Karbi Anglong district.

The team of police and CRPF apprehended three drugs peddlers.

Acting on a tip-off regarding transportation of narcotic drugs, a joint team of police and CPRF on Tuesday set a Naka checking at Dilai Tiniali under Dilai police station in Karbi Anglong district.

“The team had intercepted a Bolero vehicle bearing registration number SK-03P-1143 at the checking point and the vehicle was thoroughly searched and recovered a huge quantity of narcotic drugs,” John Das, Sub-Divisional Police Officer (SDPO) of Bokajan said.

The police official said that the team had recovered 383 grams of heroin marked as ‘Double UO Globe’ and the words “100 per cent pure” in Chinese characters.

“It is one of the purest forms of heroin and famous in Golden Triangle. It was hidden inside the glove box of the vehicle. We have also recovered one kg of Morphine hidden in the gear box, two kg of Crystal Meth and Syabu hidden in the gear box. The market value of the seized drugs is estimated at around Rs 15 crore,” John Das said.

The police and CRPF team apprehended three drug peddlers identified as Rajesh Lakandri (37), Kumar Gajimer (38) and Tangambou Marianmai (48) and they hail from Manipur.

The police official further said the consignment is supposed to be delivered in Siliguri.