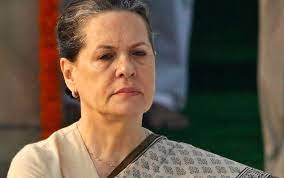 New Delhi [India]: Enforcement Directorate (ED) has accepted Congress President Sonia Gandhi’s request for deferment of summons in the National Herald case, said sources.
The agency is yet to decide the next date for the fresh summons to Gandhi, they said.

Sonia Gandhi on Wednesday sought postponement “by a few weeks” her appearance before the Enforcement Directorate till complete recovery from COVID-19 and a lung infection.

The Congress chief had been summoned on June 23 by the Enforcement Directorate in the National Herald money laundering case in which her son and Congress MP Rahul Gandhi was questioned for five days.

Sonia Gandhi had been undergoing treatment at Delhi’s Sir Ganga Ram Hospital from June 12 and was discharged on June 20. She had developed profuse bleeding from the nose following the COVID infection and had also undergone a follow-up surgery.

“Since she has been strictly advised to rest at home following her hospitalisation on account of COVID-19 and lung infection, Congress President Smt. Sonia Gandhi has written to ED today seeking the postponement of her appearance there by a few weeks till she has recovered completely,” Congress general secretary Jairam Ramesh said in a tweet. Share