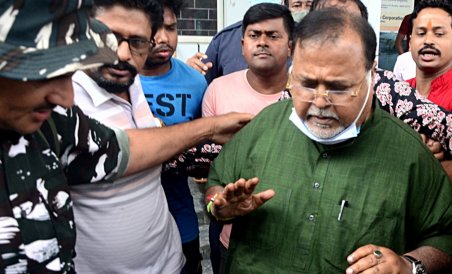 He will be shifted to AIIMS, Bhubaneswar by air ambulance today, accompanied by a doctor from SSKM Hospital and his advocate, as per Calcutta High Court’s order. The Court said that political leaders belonging to the ruling party (Trinamool Congress) had successfully avoided ED quizzing in the past by taking shelter in SSKM hospital in Kolkata.

The Court was hearing the Enforcement Directorate’s plea against the transfer of the arrested West Bengal minister to state-run SSKM Hospital.

The Court said that the accused would be taken to the Netaji Subhash Chandra Bose International Airport in Kolkata by an ambulance from the SSKM Hospital and would be accompanied by his advocate and an SSKM doctor.

The Court directed that the minister be produced before a special ED court in Kolkata through virtual mode at 4 pm on Monday.

TMC, on the other hand, demanded a time-bound probe in the ED case against Chatterjee, asserting the party will not interfere politically if any leader has done anything wrong.
ED also produced the senior TMC leader’s associate Arpita Mukherjee before a court, which remanded her to one-day custody of the agency.

ED personnel raided several locations in the state on July 22 as part of their probe into the money trail involved in a teacher recruitment scam at government-sponsored and aided schools. Chatterjee and Mukherjee were arrested as part of the ED’s investigation into the scam