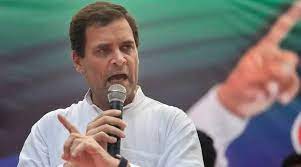 New Delhi [India]: Former Congress Party President Rahul Gandhi on Wednesday lashed out at the Centre by saying that he was not affected by the Enforcement Directorate, which questioned him for five days over his alleged role in the National Herald case.

“ED and such agencies don’t affect me, even the officers who interrogated me understood that a leader of the Congress party can’t be scared and suppressed,” the Congress leader said during an interaction with party workers at the AICC headquarters on Wednesday afternoon.

He said, “BJP government is weakening our army. The country will suffer, and these people call themselves nationalists. It is our duty to protect the future of youth.”

Appreciating the efforts of the Congress party, the Congress leader said, “There is no shortage of patience in truth. Truth never gets tired. Lies will get tired, but the truth never does.”

Thanking party workers for their support during the ED questioning, Gandhi acknowledged that he “was not alone” and that they were “fighting for democracy” with him.

On Tuesday, Gandhi was summoned for the fifth time for another round of questioning. The ED had summoned Rahul last Monday and questioned him for three straight days.

Earlier in the day, Congress leader Sachin Pilot alleged that the party’s leadership was being targeted.

“Those in power are targeting the dissidents. It is clearly a politically motivated move. It is not just about Sonia Gandhi or Rahul Gandhi, but the entire Opposition,” he said.

“The Congress leadership is being targeted because they have been vocal against BJP,” he added.

Accusing the BJP-led government of weakening the armed forces with “new deception”, Congress leader Rahul Gandhi on Wednesday said that the government will have to withdraw the Agnipath recruitment scheme and the party is with the youth in the agitation to save the future of the country.

In a tweet, Gandhi alleged that China’s forces are sitting on Indian land and said the defence forces should be strengthened. He attacked Prime Minister Narendra Modi over the Agnipath scheme which allows youth to serve in the armed forces for a period of four years.

Congress leader Rahul Gandhi left the Enforcement Directorate office in Delhi after 12 hours of questioning in a money laundering case on Tuesday.

Sonia Gandhi, who was discharged yesterday after treatment of post-Covid complications, has also been summoned by the ED but given time till June 23.

The ED is investigating the Gandhis’ role in what is known as the National Herald case. It involves the Young Indian’s takeover of AJL (Associated Journals Limited), the company that ran the National Herald newspaper, a Congress mouthpiece which has since transformed into an online-only outlet.