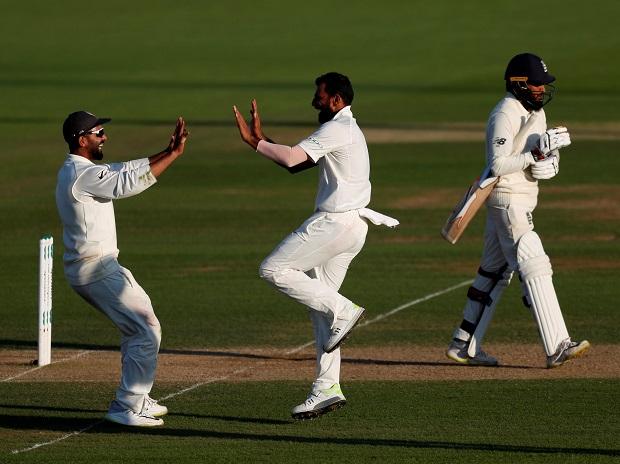 Birmingham [UK]: A solid half-century by Cheteshwar Pujara and his 50-run stand with wicketkeeper-batter Rishabh Pant put India in the driver’s seat at the end of Day three of the ongoing fifth and final Test against England at Edgbaston, with the score reading 125/3 at the end of the day’s play.

England got an early breakthrough after tea as Vihari was dismissed for 11 by Stuart Broad after the batter edged the ball to Bairstow, who was present at the third slip.

This brought Virat Kohli to the crease. He and Pujara took the innings forward and built a solid partnership. Kohli looked really good, hitting four really good boundaries. But the batter fell prey to a peach of a delivery by Ben Stokes for 20 after the ball hit his glove, got dropped by wicketkeeper Billings and went to the hands of Joe Root who was standing at the slip. With this, a solid 38-run stand between Kohli and Pujara was over.

This brought in-form Rishabh Pant to the crease. After scoring 146 in the first innings, he continued looking in good touch, hitting some good shots. Pujara also kept the scoreboard ticking with some good running between the wickets and a hit sent for four.

Pujara fought his way to a brilliant half-century off 139 balls, his 33rd in the longest format of the game. A fifty-run partnership was also complete between Pujara-Pant.

The duo helped India carry through the remainder of the day without any loss of wicket.
Earlier, Indian pacers once again excelled as they bowled out England to 284 and the pair of Cheteshwat Pujara and Hanuma Vihari ensured that India took a healthy first-innings lead of 169 with 9 wickets in hand.

Resuming the post-lunch session of Day 3 at 200/6, Jonny Bairstow went on to score his third consecutive century in three Test matches and it took him just 119 deliveries to get there. The 92-run partnership between Bairstow and Sam Billings came to an end as Mohammed Shami dismissed centurion Bairstow for 106 caught by Virat Kohli in the first slip as England lost their seventh wicket for 241.

In the next over Mohammed Siraj struck for the second time in the match dismissing Stuart Broad for 1 caught behind by wicket-keeper Rishabh Pant as England lost their eighth wicket for 248.

Sam Billings and Mathew Potts took England’s total beyond the 250-run mark and the English wicket-keeper batter started to bat aggressively as he was batting with the tailenders.

Billings though got out to Siraj as he played on an incoming delivery for 36 and the hosts lost their ninth wicket for 267.

Matthew Potts swung his bat around to score 19 off 18 balls hitting three fours and one six to reduce the deficit. He was finally dismissed by Siraj caught by Shreyas Iyer as England were bowled out for 284 runs. Jasprit Bumrah-led India took a 132-run lead in the first innings.

Mohammed Siraj was the leading bowler for India, taking 4/66, while captain Bumrah took 3/68. Shami and Thakur got two and one wickets respectively.

With a lead of 132, England desperately needed a breakthrough and James Anderson started with four slip fielders. Anderson got hit for a boundary by Shubman Gill in the second ball of his opening over but made a comeback in the next one to dismiss him for 4 caught in the second slip by Zak Crawley.

After that Cheteshwar Pujara and Hanuma Vihari batted sensibly and took India’s first-innings lead beyond the 150-run mark. The Pujara-Vihari duo ensured that there was no further damage till Tea as India was 37 for 1 extending their first-innings lead to 169.
Resuming Day 3 at 84/5, Bairstow and Stokes anchored the innings with some fantastic shots. The duo stitched a 50-run partnership and thrashed Indian bowlers at every corner of the ground.

Bairstow brought up his 24th Test half-century in 81 balls and gave England a strong hand. India finally got a breakthrough in the 38th over, after Shardul Thakur dismissed Stokes, who departed with 25 runs in account and left the team’s total at 149/6.

Billings came to the crease and joined hands with Bairstow. They also stitched a 50-run partnership in just mere 48 balls. The duo took England’s score to 200/6 before rain forced an early lunch.