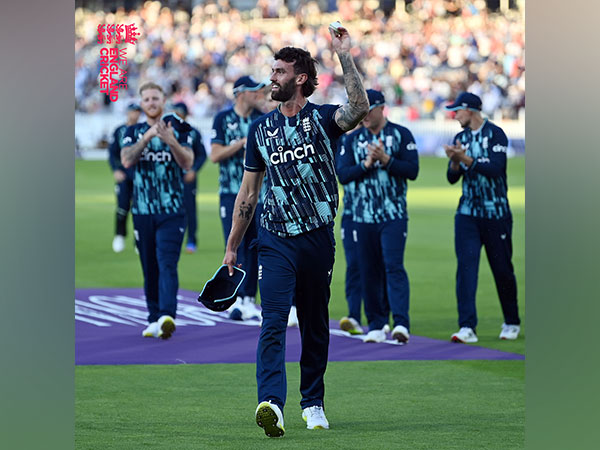 London [UK]: Reece Topley’s stunning six-wicket haul guided England to a mammoth 100 runs win over India in the second ODI of the three-match series, here at Lord’s on Thursday.

Topley took six, while David Willey, Brydon Carse, Moeen Ali and Liam Livingstone picked up one wicket each. For India, Ravindra Jadeja and Hardik Pandya scored the highest 29 runs respectively for the team. Chasing 247, India stuttered at the start, losing both experienced batters Rohit Sharma (0) and Shikhar Dhawan (9) in the powerplay. Rishabh Pant then departed for a nought, while Virat Kohli continued his pile run with a calm 16 off 25 deliveries.

Kohli’s show was ended by David Willey. His wicket left India tottering at 31 for four before Suryakumar Yadav smashed 27 off 29 deliveries and Hardik Pandya played a knock of 29 from 44 balls to restore the innings. Wickets continued to fall in Oval, with none of the visitors playing any significant knock. Ravindra Jadeja was dismissed in with a 44-ball 29 by Liam Livingstone. England bundled out India or 146 in the 39th over at the ‘Mecca of Cricket’.

Chahal scalped four wickets while Jasprit Bumrah and Hardik Pandya took two and Mohammed Shami and Prasidh Krishna settled with one each. For England, Moeen Ali and David Willey were the picks among the batters as they scored 47 and 41 runs, respectively, to take their team to a decent total.

Put to bat first, England started off the proceedings at a decent rate with the opening batters Jason Roy and Jonny Bairstow providing a strong stand. The duo smashed quick runs and took their team across the 40-run mark in 8 overs.

Hardik Pandya brought Team India their first breakthrough after he dismissed Roy, who was caught by Suryakumar Yadav and departed after scoring 23 runs off 33 balls. Joe Root walked into the crease and joined hands with Bairstow.

The pair of Root-Bairstow then stabilized the innings for some time as they stitched a 31-run partnership before Yuzvendra Chahal bowled Bairstow out at 38, leaving England’s total at 72/2 in 15 overs.

Ben Stokes was the new man in, who tried to stitch a partnership with Root but could not stand for long as the latter fell prey to Chahal’s spell and got LBW in the 18th over. Jos Buttler came to the crease but departed in the very next over after being bowled out by Mohammed Shami, with the team’s total at 87/4.

Liam Livingstone was the next man in as he tried to anchor the innings with Stokes. The duo then played a brief inning but their happiness was short-lived as Stokes was LBW by Chahal in the 22nd over and departed after scoring 21 runs.

Livingstone was then joined by Moeen Ali and the duo changed the momentum of the game. They stitched a 46-run partnership and brought England into the game. It was then in the 29th over, when Hardik Pandya sent Livingstone back to the dugout after he scored 33 runs and left England’s total at 148/6.

David Willey came to the crease with Moeen Ali and the duo continued with the carnage. They stitched a 60-run partnership and took England across the 200-run mark in 41 overs. Their reign finally came to an end after Chahal struck again and dismissed Moeen Ali in the 42nd over.

Craig Overton walked in with Willey and the duo played a brief inning before the latter was caught by Shreyas Iyer on Jasprit Bumrah’s delivery in the 47th over. With the team’s score at 237/8, Brydon Carse joined Overton at the crease but could not do much as he was LBW by Prasidh Krishna.

Reece Topley came as the last hope for the hosts but also departed in the very next over after being bowled out by Bumrah, which ended England’s innings at 246.
The visitors now need a total of 247 in 50 overs to claim a victory in the second ODI and clinch the three-match series.