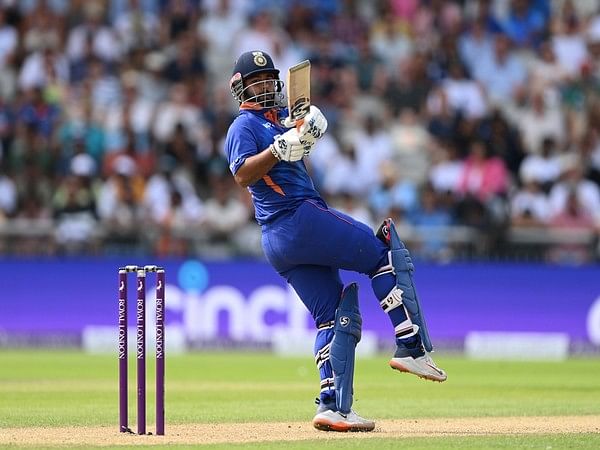 Manchester [UK]: Following his side’s crushing five-wicket defeat to India in the third ODI, England ODI captain Jos Buttler lauded Rishabh Pant for his explosive century against the Three Lions, calling him ‘fearless’ and great to watch in all formats.

A blistering century by Rishabh Pant followed by Hardik Pandya’s fifty guided Team India to a five-wicket victory over England in the series decider of the three-match series here at Manchester on Sunday. Pant played a stunning and explosive inning of unbeaten 125 runs in 113 balls and hammered England bowlers all around the ground.

“Rishabh is a fantastic player. What sets him apart from other players I think it’s his mentality that sets him apart from other players. Rishabh is a fearless cricketer and a fantastic talent. He’s brilliant across all formats and great to watch. I think he gets great backing to play however he wants to play from his team,” said Jos Buttler in a post-match press conference.

England’s white-ball captain Jos Buttler started his full-time captaincy stint on the worst note, losing both the T20I and ODI series by a 1-2 margin to Rohit Sharma-led India.
Talking about his captaincy stint with the England team Buttler said, “I am learning a lot about it. I found the first week of captaincy very busy. But I’m lost more comfortable now. playing lots of games in a short time was a challenge. I feel like a really experienced cricketer. In terms of a new captain and learning about the role, I think it will take a bit of time. There are experienced guys in the dressing room and the support staff has also helped me.”

“Learning the art of captaincy is going to develop over time with experience. Just being myself is going to be my style. It is about finding that rhythm,” he added.

Buttler top-scored with 60 off 80 deliveries in England’s 259 all out in 45.5 overs, but that was put in the shadow by Hardik’s 71 off 55 balls in a strong 133-run stand for the fifth wicket with centurion Pant at Old Trafford.

Jos Buttler admitted that he has a lot to learn in his new role as captain, following England’s 2-1 one-day international series defeat to India.

“I think we need to do better. We have not played much ODI cricket in the recent past and I think we will look at the rhythm of the game again. I think there was certainly more swing in the game. We haven’t really got in and had a great partnership. We have played in different conditions in all parts of the world. We just have to play better. We just believe in playing positive cricket,” said England captain.

Buttler rued the gap between the match against India was really short as it was tough for the team and especially bowlers to perform well.

“I think we have to look out for our players as it was incredibly tough. The schedule is incredibly tough. Three and a half hours of journey and then play another match on Tuesday. It is probably tough for the bowlers. So, we have to look alter teh players and maybe the rest of them. And this will create opportunities for others as well,” he added.