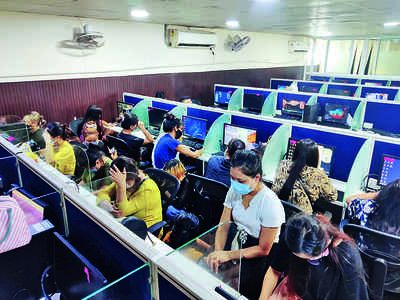 New Delhi [India]: Delhi Police busted a fake call centre involved in duping people on the pretext of redeeming gift cards. The police have arrested 12 people linked with the case.

The arrested people have been identified as Adarsh, Naveen, Pradeep, Md. Saifuddin, Nitin, Praveen Chauhan, Rahul, Brijesh, Sahiba Khatun alias Twinkle, Abha, Monika and Mohit Verma. Police had received information that a call centre involved in duping USA citizens was operating at IGNOU Road, Neb Sarai. Following that a team was formed and a trap was laid on the intervening night of June 30 near Balhara Hospital, IGNOU Road.

“On pointing out of informer a raid was conducted and it was found that a setup of computers and accessories were installed in the premises. Several persons were receiving the calls and were engaged in communicating with the victims. They were impersonating themselves as Amazon representative,” stated the police release.

Police have also recovered nine desktop systems along with an internet router and TP-link modems from the accused’s possession.

“By using computer Apps- Team Viewer, Zoho Assist, they dupe the victim and cause the wrongful loss through gift cards redeemed on Amazon,” said police.