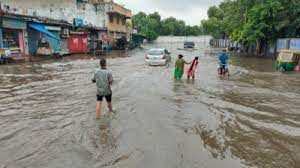 The Meteorological Department predicted light to moderate rainfall in the entire state for the next five days. Extremely heavy rainfall is expected in many districts of South Gujarat, Saurashtra and Kutch.

In a telephonic conversation with Gujarat Chief Minister, the Home Minister also took stock of the situation in the state that arose due to heavy rains affecting several villages.

“With reference to flood-like situations arising due to heavy rains in various areas of Gujarat, I have spoken to Gujarat Chief Minister Bhupendra Patel and assured all possible help from the Modi government,” Shah said in a tweet.

Prime Minister Narendra Modi also assured Gujarat Chief Minister to provide all necessary help including NDRF to tackle the situation from the Centre to mitigate the sufferings of the people affected by the flood in the state.

According to Gujarat CM PRO, Modi had a telephonic conversation with Patel to enquire about the dire situation created by widespread and heavy rains in the state.

The Gujarat Chief Minister gave full details to the Prime Minister about the heavy rains that have lashed out across the state in the last 48 hours, especially in the South and Central Gujarat region and the situation that has arisen as a result of the same.

Gujarat’s capital Ahmedabad was inundated with a record of 115 mm plus rainfall in just three hours on Sunday, setting the highest record in the past five years in a single day in July.