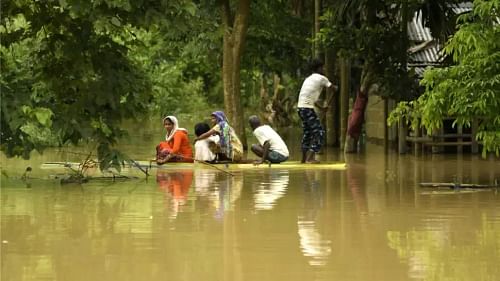 Morigaon (Assam) [India]: The flood situation in Assam is still grim as nearly 29.70 lakh people in 30 districts have been affected by the flood.

According to the Assam State Disaster Management Authority (ASDMA), 14 people including 6 children died after drowning in flood waters in the state in the last 24 hours and the total death toll in floods and landslides in the state touches 173 this year so far.

In central Assam’s Morigaon district, many people are staying on roads, and embankments for the last one year as floods hit most of the areas of the district twice within a month.

Babulal Biswas, a resident of the Singimari area in the Morigaon district, is staying along with his family on road by making a temporary shed for the last one month after the flood waters submerged his house.

“We are taking shelter on road for the last one month, the first wave of flood-hit us badly and the flood waters are still in our house. Now God will know what will happen. The flood waters have also damaged our crops and agricultural lands. How we will live, we don’t know what we will do,” Biswas said.

Another resident of the Singimari area, Sanjay Mandal is also facing similar problems and took shelter on road along with his family.

“We are staying on road for the last month. The flood destroyed our crops and agricultural lands. Now this road has become our home. Many people in this area are also facing similar problems. We are also facing a food, and drinking water crisis,” Mandal said.

The Morigaon district administration has set up 98 relief camps for the flood-affected people where around 29,000 people are lodging, but many more are taking shelter on roads, embankments, and high lands by making temporary sheds.

The ASDMA flood report stated that more than 1.68 lakh people of Morigaon district are still affected by the deluge.

The flood water level is receding in some areas of the district, but people are still facing many problems.

The health team is in constant touch with the people who were affected by floods and are being given treatments, Dr Amar Jyoti Deka, in-charge of Baghara State Dispensary said.

“We are in contact with our people and are giving more importance to pregnant women, especially for high-risk, under five years children and the people who are suffering from chronic diseases,” Dr Jyoti said.

The district administration has also organized health camps in the flood-affected areas of the district.