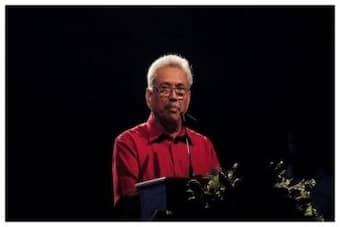 Colombo [Sri Lanka]: Former Sri Lankan President Gotabaya Rajapaksa, who landed in the Maldivian capital Male on a Sri Lankan Air Force plane, will be leaving for Singapore on Wednesday.

The Prime Minister’s Office also confirmed that Rajapaksa has left the country.
A statement issued by the Sri Lankan Air Force said that Rajapaksa prepared a SLAF aircraft to fly to the Maldives per his presidential powers and with the approval of the Ministry of Defence.

Rajapaksa and his wife along with two bodyguards travelled to the Maldives after full approval of the country’s Defence Ministry, Sri Lanka officials confirmed on Wednesday.

“According to the request of the Government in accordance with the powers vested in an Executive President in the Constitution of Sri Lanka, His Excellency the President and the Lady along with two bodyguards from Katunayake International Airport to the Maldives subject to the full approval of the Ministry of Defence subject to immigration, customs and all other laws at Katunayake International Airport. An Air Force flight was given clearance early in the morning on July 13, 2022 to depart,” Sri Lankan Air Force Media Director said in a statement.

As protests intensified in the Sri Lankan capital city of Colombo, protestors who had gathered outside Sri Lanka Prime Minister’s office have taken over his residence at Flower Road here.

Security personnel resorted to tear-gas shelling to drive away protestors on the streets of Colombo.

Wickremesinghe Wednesday declared an emergency and imposed a curfew in the western province of the country as protesters came prepared to face tear gas shelling by security forces deployed outside Wickremesinghe’s residence. Air patrolling has also started around the PM’s residence.

“In the absence of any of these, the PM cannot exercise the powers of President, and cannot declare curfew or a state of emergency,” he said in another tweet.

73-year-old Gotabaya Rajapaksa had gone into hiding after crowds of protesters stormed his residence on July 9 and he had announced that he will resign on July 13.