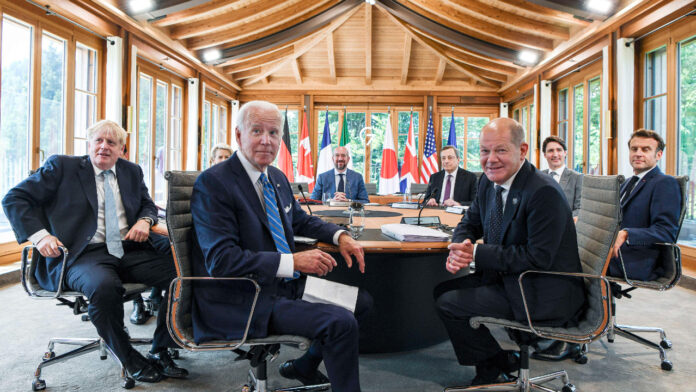 Washington [US]: To give another blow to the Russian economy, US on Sunday said that the Group of Seven (G7) countries are going to announce sanctions on Russian gold.

US said that the G7 nations will ban the import of Russian gold with the aim of tightening sanctions screws on Moscow. As the leaders of the world’s wealthiest nations gathered in the Bavarian Alps on the sidelines of G7 Summit, President Joe Biden said, “Together, the G7 will announce that we will ban the import of Russian gold, a major export that rakes in tens of billions of dollars for Russia.”

Earlier as well, Biden tweeted, “The United States has imposed unprecedented costs on Putin to deny him the revenue he needs to fund his war against Ukraine. Together, the G7 will announce that we will ban the import of Russian gold, a major export that rakes in tens of billions of dollars for Russia.”

Notably, these measures were initially flagged by the United Kingdom. However, a senior US administration representative who spoke on condition of anonymity told reporters that the G7 would make an official announcement on the gold import ban on Tuesday.

Reporting from the G7 summit, Al Jazeera’s James Bays, said the first session on Sunday will be focusing on the global economy. He added that the sanctioning of Russian gold has been hailed as one of the summit’s achievements and is likely to go ahead.

On the other hand, Bays also informed that the countries are also going to be mindful of their own economies and G7 leaders are unlikely to greenlight any additional sanctions, “particularly gas imports from Russia to Europe.”

Taking to Twitter, Kuleba wrote, “This 7 y.o. Ukrainian kid was sleeping peacefully in Kyiv until a Russian cruise missile blasted her home. Many more around Ukraine are under strikes. G7 summit must respond with more sanctions on Russia and more heavy arms for Ukraine.”

Gold exports are a major source of revenue for Russia in terms of their ability to transact with the global financial system. Last year, they were worth 12.6 billion pounds (USD 15.45bn) and wealthy Russians have been buying bullion to reduce the financial effect of Western sanctions.

The clampdown is likely to be the most impactful economic measure against Moscow announced at the G7’s three-day meeting. Notably, the Russian’s invasion of Ukraine is now in its fifth month.