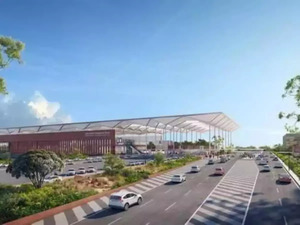 New Delhi [India]: Union Minister for Road Transport and Highways Nitin Gadkari on Thursday announced that the government has approved construction of a road linking Haryana to the upcoming Jewar International Airport in Gautam Budh Nagar district of Uttar Pradesh.

He said construction of two flyovers of 2.5 kilometres length at Kushinagar, place of Lord Buddha’s Parinirvana in Uttar Pradesh has been sanctioned with a budget of Rs. 42.67 crores.

In a series of tweets, he said these flyovers will be completed in 18 months. He said with their construction, the arrival of domestic and foreign tourists will be facilitated and the problem of traffic jam of local people will be solved.

He said this road will be constructed on hybrid annuity mode with a total length of 31.425 km. The construction period will be 2 years and it will also connect Agra, Mathura and West UP, he added.

Meanwhile, on Wednesday, Road Transport and Highways Minister Nitin Gadkari said that the new six-lane tunnel at Khambatki Ghat on Pune-Satara Highway is expected to be completed by March next year.

In a series of tweets, Gadkari said, the country is witnessing unprecedented infrastructural transformation under the leadership of Prime Minister Narendra Modi and unfolding ‘Prosperity Through Connectivity. He said, New India demands world class infrastructure.

Gadkari highlighted that the existing ‘S’ curve in Satara-Pune direction will be completed soon, which would lead to a drastic reduction in accident risks. He said, this tunnel is a twin tunnel with three lanes each and over six kilometres.

The Minister said that the total capital cost for the project is approximately nine hundred twenty-six crore rupees.