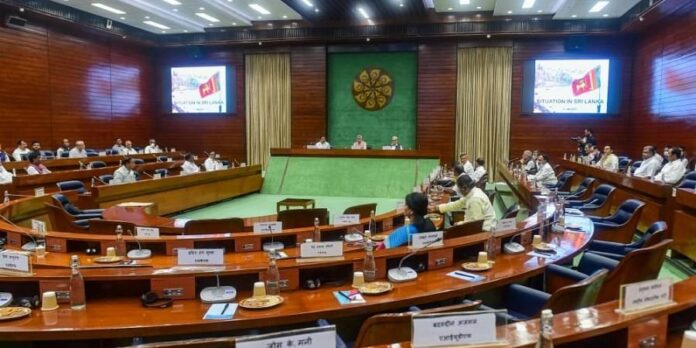 New Delhi [India]: An all-party meeting on the situation in Sri Lanka began here on Tuesday and senior leaders from various political parties are attending it.

External Affairs Minister S Jaishankar will brief the MPs on the situation in Sri Lanka which is facing its worst economic crisis in seven decades. National Conference leader Farooq Abdullah, DMK’s TR Baalu, MDMK’s Vaiko, and Communist Party of India’s Binoy Viswam are among the MPs attending the meeting.

The government has called the meeting to address the concerns of several political parties as they are worried about the Sri Lankan crisis.

In his recent meeting with Prime Minister Narendra Modi and EAM Jaishankar, Tamil Nadu Chief Minister MK Stalin expressed his concern about the situation in Lanka and asked for permission to send relief material to the island nation.

At the all-party meeting on Sunday, both DMK and AIADMK leaders had urged the Centre to intervene in the crisis to help the neighbouring country resolve its crisis.

India has expeditiously finalized and delivered assistance as well as support worth about US$ 3.8 billion to help Sri Lanka deal with the economic crisis. This is in the form of currency swaps, deferment of repayment of Sri Lanka’s liabilities to the Reserve Bank of India under the Asian Clearing Union mechanism.

India has also provided credit assistance, of about 1.5 USD for the financing of imports of fuel, food, medicines, fertilizers, and other essential commodities from it.