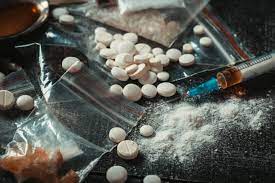 Vadodara (Gujarat): Gujarat Police on Wednesday arrested four drug peddlers in connection with the smuggling of mephedrone drugs from Madhya Pradesh to Vadodara.

Police have recovered more than 81 grams of drugs from them worth Rs 8 lakhs and seized a vehicle from the accused. “We arrested 4 drug peddlers in connection with the smuggling of mephedrone drugs from MP to Vadodara. We have got more than 81 grams of drug from them worth Rs 8 lakhs. A vehicle has also been seized from them,” ACP JB Gaur, Vadodara Police said.

Earlier, in another case of seizure of drugs in Gujarat, gunny bags thrown in the sea by Pakistani boat AL Noman, which was apprehended by the Indian Coast Guard (ICG) and Gujarat Anti-Terrorism Squad (ATS) last week, were recovered in Gujarat’s Jakhau by Border Security Force (BSF) and Marine Police in the first week of June.

The Pakistani crew had thrown the consignment of around 50 kg of drugs near the creek area in the Kutch region of Gujarat on May 30 to avoid being caught with drugs in the Indian maritime territory.

Congress is daydreaming, Himachal results will be in favour of lotus: BJP