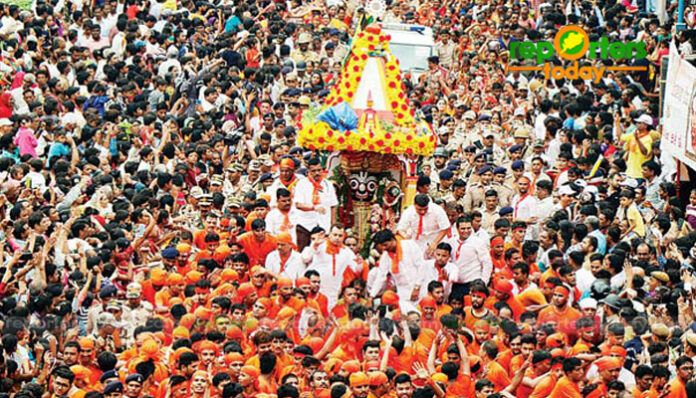 The Chief Minister performed the Pahind ritual early in the morning from the Jagannath temple in Ahmedabad and made the chariot of God depart towards the city, according to an official statement by Gujarat CMO. After reaching the Chief Minister’s residence, he reached the CM dashboard and did the real-time monitoring of the Rath Yatra on the wall of the CM dashboard.

CM Bhupendra Patel closely observed the chariots of Lord Jagannathji, brother Balbhadra and sister Subhadraji, the procession of devotees and the police patrolling on the Yatra route, and the activities of security, the statement read.

In this year’s Rathyatra, for the first time, the Chief Minister also saw in depth the successful experiment of the state Home Department using drone technology to keep a hawk-eye on the Yatra from a height of 65 meters.

He appreciated the security provided to the rath yatra by helicopters and drones.
The Chief Minister also observed the activities of the personnel of Gujarat Police who are deployed at sensitive places, and points in this rath yatra in Ahmedabad, which for the first time has been equipped with about 2500 body-worn cameras.

Ahmedabad City Police and Mahanagarpalika had set up cameras at more than 100 points to monitor the procession, the details of which were also learned by the Chief Minister from the Minister of State for Home Affairs Harsh Sanghvi at this time, it added.

He used real-time monitoring via GPS system of akhada-bhajan congregations and trucks and vehicles involved in the yatra in this year’s Rath Yatra on the video wall of the CM dashboard.

The CM also got the details of the continuous monitoring system that has been set up with the camera from 46 fixed locations of the entire journey including other moving, vehicle-mounted cameras and high-resolution CCTV.

Apart from Ahmedabad, the Chief Minister also watched the live broadcast and control room monitoring of the Rath Yatra held in Dakor, Mahemdavad was viewed from the CM dashboard.

The Chief Minister has strengthened the communication during the Yatra by connecting the Dhaba Point, Strategic Police Point and the personnel involved with mobile WhatsApp.