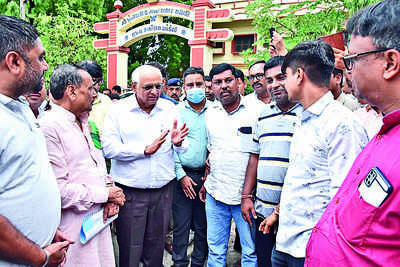 Prime Minister Narendra Modi also assured Gujarat Chief Minister to provide all necessary help including NDRF to tackle the situation from the Centre to mitigate the sufferings of the people affected by the flood in the state.

Claiming one life, heavy rainfall caused a flood-like situation in Gujarat’s Rajkot on Tuesday. Residents living in the lower reaches have been asked by the authority to remain alert.
The Meteorological Department predicted light to moderate rainfall in the entire state for the next four days. Extremely heavy rainfall is expected in many districts of South Gujarat, Saurashtra and Kutch.

According to Gujarat CM PRO, Modi had a telephonic conversation with Patel to enquire about the dire situation created by widespread and heavy rains in the state.

The Gujarat Chief Minister gave full details to the Prime Minister about the heavy rains that have lashed out across the state in the last 48 hours, especially in the South and Central Gujarat region and the situation that has arisen as a result of the same.

Several villages in Gujarat have been cut off, prompting officials to deploy helicopters to rescue people. Several people have lost their lives so far due to the floods.

NDRF teams are working to rescue people. Over 2000 people have been evacuated from various areas. Efforts to rescue more are on.