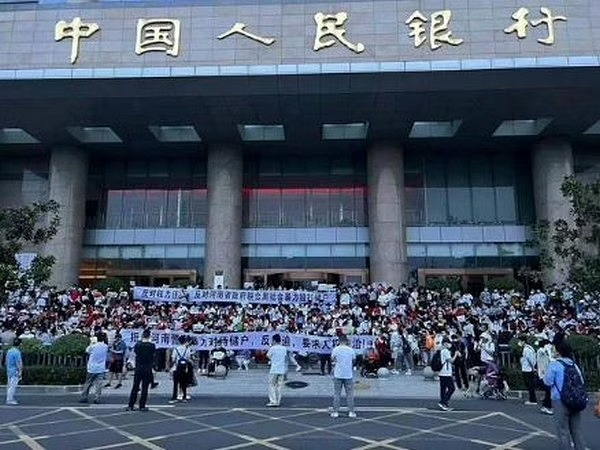 A video has surfaced online that shows homebuyers in Shangqiu, Henan taking out a protest march with banners having slogans that read “Reject postponement, reject delays, demand full resumption of work, deliver houses on time”, and other such slogans.

It was reported that Beihai, Guangxi which was facing lockdown for a month lifted restrictions on August 17.

Many videos have emerged that show there were protests on August 15. These videos show the probability that the restrictions were lifted due to the protests, reported local media.

Henan Province, has been the epicentre of tens of thousands of protests from angry homeowners who are withholding their mortgage payments on unfinished homes in protest at delays by the real estate developers.

Some suppliers to Chinese real estate developers — including companies that sell to Evergrande, the world’s most indebted developer — are threatening to stop paying their bank loans to protest the growing mountain of unpaid bills.

At least 17 banks have issued statements on their exposure to property projects that have been delayed. Most of them disclosed the amounts of their loans at risk, with a total of USD 328 million in mortgages tied to the stalled projects.

Taking out a mortgage on an unfinished home, also known as pre-sales, is common practice in China. More than 85 per cent of houses are sold through presale, up from about 50 per cent in 2005.

The pre-sales mortgages often begin months or even years before buildings are completed. But the overflowing frustration among buyers stems from those who have already paid for homes that still don’t exist after massive delays, where many developers have failed to deliver because of COVID lockdowns and persistent financial troubles in the sector, reported local media.

Online platforms with information about mortgage boycotts and online petitions have been scrubbed, social media posts tracking the issue have vanished from the internet, and some blogs on WeChat and Weibo discussing the movement were wiped.

For years the Chinese government tried to diffuse the debt fiasco and for that in 2020, Beijing introduced a policy to oversee and handle loan regulations for the real estate sector, commonly known as the “three red lines”.

Under this, the developers had to meet three criteria- liability to asset ratio lower than 70 per cent, net debt to equity ratio less than 100 per cent, and a ratio of cash to short-term borrowings less than 1.

Last year, the largest property developer, Evergrande Group defaulted on their interest payments, eventually leading to the slump of the entire industry. And the situation worsened by June 2022.

According to the authors, the sales and home prices fell, construction dropped, property loan growth slowed and consumer confidence weakened.

Protests erupted across the country over the mortgage crisis and banking crisis, despite the market exhibiting signs of stability.

The Chinese financial system is in a precarious situation, brought on by its “poor capital turnover”, liquidity stress, and global and domestic economic slowdown.