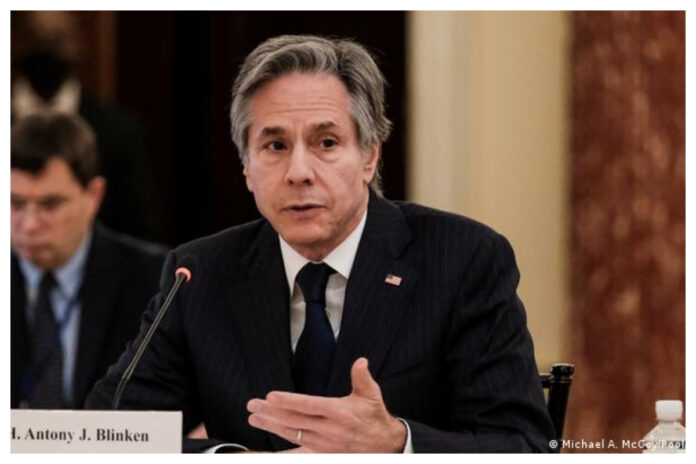 Phnom Penh [Cambodia]: Hoping China does not “manufacture” a crisis, US State Secretary Antony Blinken said that the US continues to hail peace and stability across the Taiwan Strait and opposes any unilateral efforts to change the status quo, especially by force.

Blinken’s remarks came amid live-fire military exercises being conducted by China in areas around Taiwan as Beijing is irked by US House Speaker Nancy Pelosi’s visit to Taiwan. “The United States continues to have an abiding interest in peace and stability across the Taiwan Strait. We oppose any unilateral efforts to change the status quo, especially by force. We remain committed to our “one China” policy, guided by our commitments under the Taiwan Relations Act, the three Communiques, and the Six Assurances,” Blinken said.

Blinken further emphasized that nothing has changed about our position, and he hopes very much that Beijing will not manufacture a crisis or seek a pretext to increase its aggressive military activity.

State Secretary’s comments also comes ahead of the ASEAN-U.S. Ministerial Meeting. Moreover, the 55th meeting of the foreign ministers of the Association of Southeast Asian Nations (ASEAN) began on Wednesday in Cambodia’s capital Phnom Penh to discuss COVID-19 recovery and regional issues.

He said that US and countries around the world, believe that escalation serves no one and could have unintended consequences that serve no one’s interests, including ASEAN members and including China.

“We’ve reached out to engage our Peoples’ Republic of China (PRC) counterparts in recent days at every level of government to convey this message. Maintaining cross-strait stability is in the interests of all countries in the region, including all of our colleagues within ASEAN.”

Indonesian Foreign Minister Retno Marsudi said that the presence of Blinken in Cambodia shows the U.S. commitment to further strengthen relations with ASEAN. She thanked US for hosting the ASEAN-U.S. Summit in Washington, D.C., on the 12th and 13th of May 2022.

Speaking on the current global issues she said, “While COVID-19 pandemic is far from over, WHO has declared monkeypox as another public health emergency of international concern. In the meantime, the war in Ukraine continues. This situation creates significant impacts to the world, in particular the developing countries. Food and energy insecurity became more (inaudible) than before. The financial space is tightening. The question is: How can ASEAN-U.S. partnership help to ease these situations?”

The foreign minister noted, “Indo-Pacific is the future of our region. Our future will depend on how we manage the Indo-Pacific. The Indo-Pacific region should not be approached with an either/or mindset, but rather with the mindset of Indo-Pacific cooperation, strategic trust, and, last but not least, always upholding the international laws.”