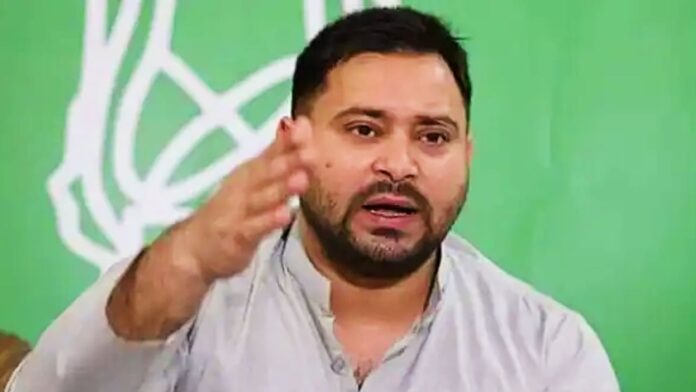 Patna (Bihar) [India]: Amid ongoing protests over the Centre’s new military recruitment scheme Agnipath, RJD leader Tejashwi Yadav on Wednesday questioned the Centre over the scheme and asked if ‘Agniveers’ will feel insecure about their future, how will they be able to defend the country’s borders?

“They must not mess with the future of the youth at any cost. The questions that we had raised are not being answered. People are very upset. If these people have to feel unsure about their own future, how are they going to defend the border? questioned Tejashwi while speaking to reporters here today. “We have submitted a memorandum. Youngsters across the nation are upset over the launch of the Agnipath scheme. It is believed that the scheme could render 75% of the soldiers unemployed after four years. It is a matter of grave concern,” Yadav said.

“We demand that all the FIRs registered against the protesting youth should be quashed, and they should be released from prison,” he added.

RJD members, including leader Tejashwi Yadav, held a protest march from the Bihar Vidhan Sabha to the Raj Bhawan in Patna, calling for the withdrawal of the Agnipath scheme.

On June 17, the three chiefs of Indian Defence services hailed the decision of the Central government to approve the Agnipath Scheme, a recruitment process for Indian youth to serve in the Armed Forces.

“The Government has announced Agnipath scheme under which youth will be able to join armed forces. The age criteria will be 17.5 to 21 years. Happy to announce that for the first recruitment, the upper age limit has been revised to 23 years. It will benefit the youth. Air Force recruitment will begin on June 24,” the Indian Air Force chief, Air Chief Marshal VR Chaudhari said in a virtual address on Friday.

The Indian Army chief General Manoj Pande, in an exclusive interaction with ANI, informed that the training of first Agniveers will begin this December.

“As far as the question of Agniveers going to recruitment training centres is concerned, the training of first Agniveers will begin this December (in 2022) at the centres. The active service will commence in the middle of 2023,” said General Pande.

Chief of Naval Staff Admiral R Hari Kumar termed the Agnipath scheme as “one of the most transformational schemes for the armed forces.”

Granting a one-time waiver, the Centre on June 16, 2022, announced that the Agniveer upper age limit for recruitments via Agnipath Scheme has been extended to 23 years from 21 years.

Indian Air Force also appreciated the government for increasing the upper age limit to 23 from 21 for recruitment under the Agnipath scheme for the year 2022.

COVID-19 halted the Army’s recruitment for over two years. In 2019-2020, the Army recruited jawans and there has been no entry since then. On the other hand, the Indian Navy and the Indian Air Force had both recruited in the last two years respectively.