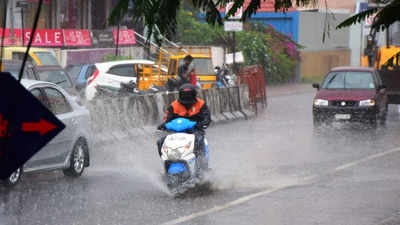 Chandigarh (Punjab/Haryana): The India Meteorological Department (IMD) on Friday predicted heavy rains in Punjab, Haryana and Chandigarh during the next two days till July 10.

From July 8 to July 10, heavy (64.5 to 114.5 mm) to very heavy rainfall (115.6 to 204.4 mm) is expected to lash Punjab, Haryana, and Chandigarh accompanied by thunderstorms and lightning. The states are likely to encounter isolated/scattered rainfall activity with isolated thunderstorm/lightning today and increase hereafter becoming fairly widespread to widespread rainfall activity during the next two days.

Hoshiarpur, Nawanshahr, Ropar, Ludhiana, Jalandhar and several other cities of Punjab are likely to witness heavy showers between July 9 and July 10. Many cities in Haryana are also likely to witness a torrential downpour.

Farmers are being advised to undertake measures to drain the excess water and not allow it to stagnate in the fields in order to avoid damage to paddy cultivation due to over-hydration and strong winds.