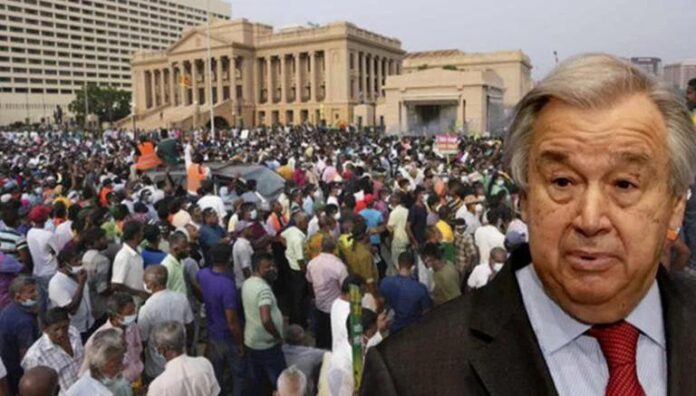 New York [US]: Amid the unrest in Sri Lanka, the United Nations (UN) Secretary-General Antonio Guterres on Thursday said that it is important to address the conflict and grievances of protestors.

Taking to Twitter, UN Chief urged all party leaders of Sri Lanka to compromise for a peaceful and democratic transition.

“I continue to follow the situation in Sri Lanka very closely. It is important that the root causes of the conflict and protestors’ grievances are addressed. I urge all party leaders to embrace the spirit of compromise for a peaceful and democratic transition,” the UN tweeted.

A large number of protestors on Wednesday gathered outside the residence of the Sri Lankan Prime Minister and took over his office. Security personnel resorted to tear-gas shelling to drive away protestors on the streets of Colombo.

This comes after the embattled President Gotabaya Rajapaksa who escaped to the Maldives today appointed Prime Minister Ranil Wickremesinghe as the interim President of Sri Lanka.

Gotabaya Rajapaksa who earlier fled to the Maldives on Wednesday with his wife and two bodyguards after full approval of Sri Lanka’s Defence Ministry is expected to go to Singapore.

Rajapaksa along with his wife Ioma Rajapaksa and two security officers were expected to leave for Singapore on board SQ437 from Male to Singapore tonight but did not board the aircraft due to security issues, Daily Mirror added citing sources.

Moreover, talks are on to secure a private aircraft for the embattled President, Maldivian Media reported.

Over the incident, the Bar Association of Sri Lanka (BASL) asked the protesters to immediately return the office of the Prime Minister to the respective authorities saying ‘attempts to occupy Government Offices and to cause destruction or damage to property do not constitute peaceful protests’.

73-year-old Gotabaya Rajapaksa had gone into hiding after crowds of protesters stormed his residence on July 9 and he had announced that he will hand over his resignation letter on Wednesday.