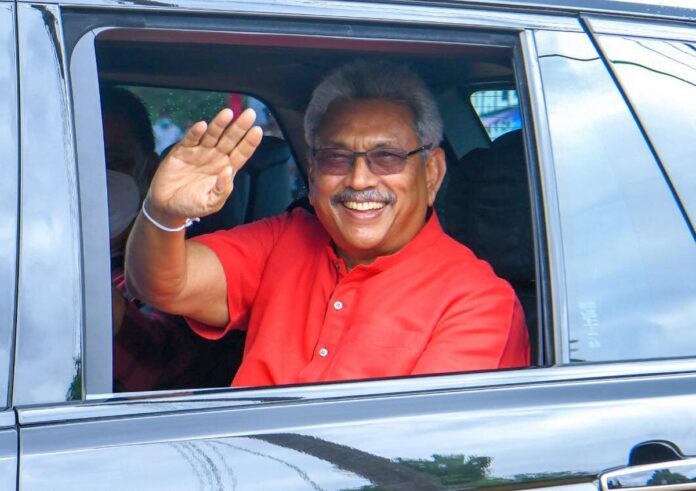 Colombo [Sri Lanka]: The Indian High Commission in Sri Lanka has dismissed “baseless” and “speculative” media reports that said that India has facilitated President Gotabaya Rajapaksa’s exit from the country.

According to reports, Gotabaya Rajapaksa had fled the crisis-hit island country hours before he was scheduled to resign from the post.

“It is reiterated that India will continue to support the people of Sri Lanka as they seek to realise their aspirations for prosperity and progress through democratic means and values, established democratic institutions and constitutional framework,” it added.

President Gotabaya Rajapaksa and his wife along with two bodyguards travelled to the Maldives after full approval of the country’s Defence Ministry, Sri Lanka officials confirmed on Wednesday.

In a statement, the Sri Lankan Air Force also said that the move was done under the executive powers vested with the president.

“According to the request of the Government in accordance with the powers vested in an Executive President in the Constitution of Sri Lanka, His Excellency the President and the Lady along with two bodyguards from Katunayake International Airport to the Maldives subject to the full approval of the Ministry of Defence subject to immigration, customs and all other laws at Katunayake International Airport. An Air Force flight was given early in the morning on 13th July 2022 to depart,” Sri Lankan Air Force Media Director said in a statement.

Rajapaksa landed at the Velana International Airport in the Maldives early Wednesday. The Prime Minister’s Office also confirmed that President Gotabaya Rajapaksa has left the country.

On July 11, Rajapaksa signed a resignation letter scheduled to be handed over to the Speaker of Parliament to make a public announcement today (July 13).

Prime Minister Ranil Wickremesinghe is scheduled to be sworn in today as interim President till a new President is elected by Parliament on July 20 and nominations for the presidency will be called for on July 19.

Sri Lanka is facing the worst economic crisis since its independence which has led to massive protests demanding the ouster of Gotabaya as the President.

Sri Lanka’s speaker of parliament Mahinda Yapa Abeywardena has said political party leaders have decided to elect a new president on July 20 through a vote in parliament.

The development comes after thousands of people stormed into Rajapaksa’s President House in Fort on July 9.

The dramatic visuals also came from PM’s official residence where they were seen playing carrom board, sleeping on the sofa, enjoying in park premises and preparing food for dinner.

In the wake of record food price inflation, skyrocketing fuel costs and widespread commodity shortages, some 61 per cent of households in Sri Lanka are regularly using coping strategies to cut down on costs, such as reducing the amount they eat and consuming increasingly less nutritious meals.