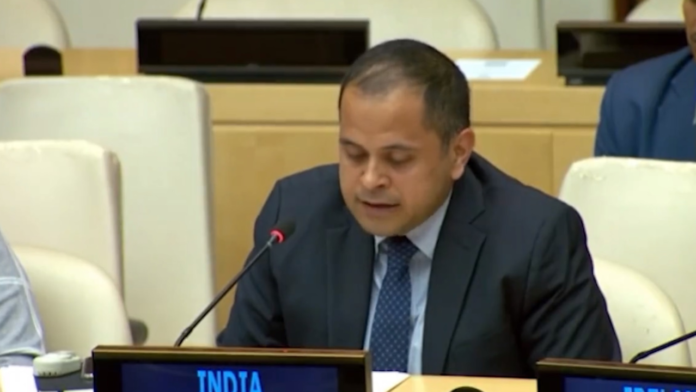 New York [US]: India once again expressed deep concern over the situation in Ukraine on Monday and called for a cessation of all hostilities while backing efforts to alleviate the sufferings of the people of Ukraine especially encouraging talks between Kyiv and Moscow.

Speaking at the UNSC Arria-formula meeting on Ukraine, Counsellor in India’s Permanent Mission to the UN Pratik Mathur said India remains deeply concerned over the situation in Ukraine.

“The conflict has resulted in the loss of lives and countless miseries for its people, particularly for women, children and the elderly, with millions becoming homeless and forced to shelter in neighbouring countries.”

Counsellor Mathur said from the beginning of the conflict, India has been consistently calling for a complete cessation of all hostilities and advocated the path of peace, dialogue and diplomacy.

“We support all efforts to alleviate the sufferings of the people of Ukraine especially encouraging talks between Ukraine and the Russian Federation,” he said.

He said India believes that no solution can be arrived at the cost of innocent lives. “We continue to reiterate that the global order is anchored on international law, UN charter and respect for territorial integrity and sovereignty of states.”

This statement comes two days after Ukraine media reports said that Kyiv has suspended its envoy to New Delhi, along with several other countries.

More than four and half months since the start of the Russia-Ukraine conflict, civilians have suffered from explosions and missile strikes, particularly in eastern cities including Donetsk, Sloviansk, Makiivka, Oleksandrivka and Yasynuvata, but also in southern oblasts, in Odessa and Mykolaiv.

According to OCHA’s latest humanitarian update, while east Ukraine accounts for most of the active warfare, more missile attacks and casualties were reported in the last week in several other regions.

These include eastern Kharkiv and western Khmelnytski oblasts, where civilians and civilian infrastructure have been impacted heavily.

Last week, External Affairs Minister S Jaishankar said that India has taken the “right course” on the Ukraine conflict and the most urgent issue is to prevent hostilities from escalating to a level where they only do harm.

While addressing an event on the book ‘[email protected]: Dreams meet delivery’ in New Delhi today, Jaishankar said that India has adopted the “right course” since Russia launched its military operation in Ukraine in February.

“The most urgent issue…is to prevent hostilities from escalating to a level where it only does harm,” Jaishankar said.