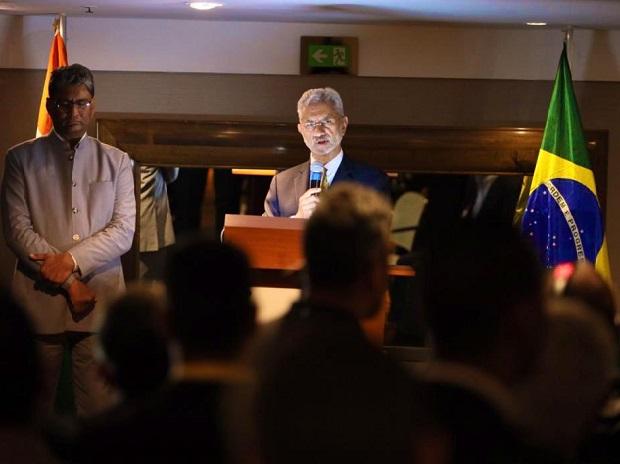 Sao Paulo [Brazil]: External Affairs Minister, S Jaishankar interacted with the association of entrepreneurs of Brazil, LIDE on Tuesday and said that India and Brazil are not only partners but can share best practices for their mutual growth and progress.

“Networking of established Brazilian entrepreneurs with growing Indian presence in Brazil was visible. India & Brazil are not only partners but can share best practices for their mutual growth & progress,” said EAM in a tweet.

The EAM also visited the Federation of Industries of the State of Sao Paulo which is the largest Industry association in Brazil and reaffirmed that several opportunities await for both nations in business cooperation under the umbrella of strengthened bilateral ties.

“Visited Federation of Industries of the State of Sao Paulo, the largest Industry association of Brazil. Presentations from WEG, @embraer and UNICA reaffirmed the significant opportunities that exist for greater business cooperation,” Jaishankar tweeted.

On Monday, Jaishankar concluded his first ever official visit to Paraguay where he inaugurated the newly opened Indian Embassy in the capital city, Asuncion. The embassy of India in Asuncion was jointly inaugurated by EAM and his Paraguay counterpart Julio Cesar Arriola.
‘

The inauguration was attended by dignitaries from the Paraguayan government including Interior Minister Federico A. Gonzalez. Other guests included members of the diplomatic corps, the business community, and the Indian diaspora in Paraguay.

He also unveiled a bust of Mahatma Gandhi in Paraguay on Sunday and appreciated the Asuncion Municipality’s decision to locate it at the prominent waterfront of the city. The External Affairs Minister also visited the historic Casa de la Independencia from where Paraguay’s Independence movement started more than two centuries ago.

This was the first ever visit of an Indian Foreign Minister to the Republic of Paraguay which has taken place as the two countries completed the 60th anniversary of the establishment of diplomatic relations.

Prior to his visit, Jaishankar on Friday met with the Ambassadors from Latin American and Caribbean countries in New Delhi ahead of his visit to the region.