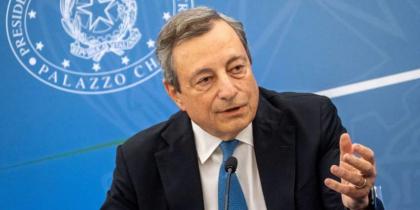 Rome [Italy]: Italian Prime Minister Mario Draghi said on Thursday that he would resign as the country’s premier after a party in his ruling coalition did not participate in a confidence vote.

“I want to announce to you that this evening I will hand over to the President of the Republic a letter of resignation,” the press service of the government’s Chigi Palace quoted him as saying, according to Sputnik News Agency. On Thursday, senators from one of the biggest parties in Draghi’s coalition — the Five Star Movement — abstained from a confidence motion, a stunt that throws Italy’s government into crisis and could even lead to its collapse, The Washington Post reported.

“Today’s vote in parliament is a very significant event from a political point of view,” Draghi said.

Though the government survived — by 172 to 39 — Draghi, according to The New York Times, had made clear that he would not lead a unity government that had no unity.
According to multiple reports, he is now expected to meet with the country’s president, Sergio Mattarella, to discuss next steps.