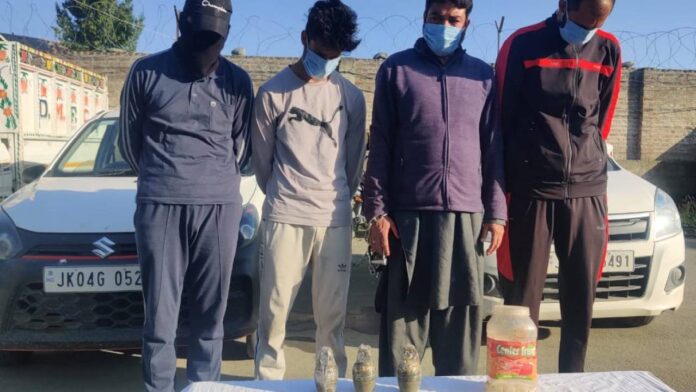 Incriminating materials, explosives, ammunition and vehicles were recovered from their possession, according to a press note by police. Police in Budgam along with 53RR and 181Bn CRPF arrested four terrorist associates identified as Younis Manzoor, Mehboob Ahmed, Irshad Ahmad Ganie and Muzaffar Ahmad.

The preliminary investigation revealed that the arrested terrorist associates were involved in providing logistic support to the proscribed terror outfit LeT by distributing proceeds of narcotics to active terrorists and terror operatives of the outfit.

Further investigations also revealed that the module has been working on the directions of terror operatives for the collection of narcotics and subsequently distributing the proceeds of narcotics among the terrorists, the press note read.

Moreover, five vehicles have also been seized which have been purchased from the proceeds of narcotics sales with the intention of keeping the money or proceeds safe and were set to be sold on the directions of active terrorists or terror operatives (handlers) as and when the payment was required by the terrorists.

Besides this, incriminating material of proscribed terror outfit LeT, explosive substances including three grenades, two AK-Magazines and 65 rounds of AK-47 were recovered from their possession.

A case under relevant sections of law has been registered at the Chadoora Police Station.
Further investigation is in progress.