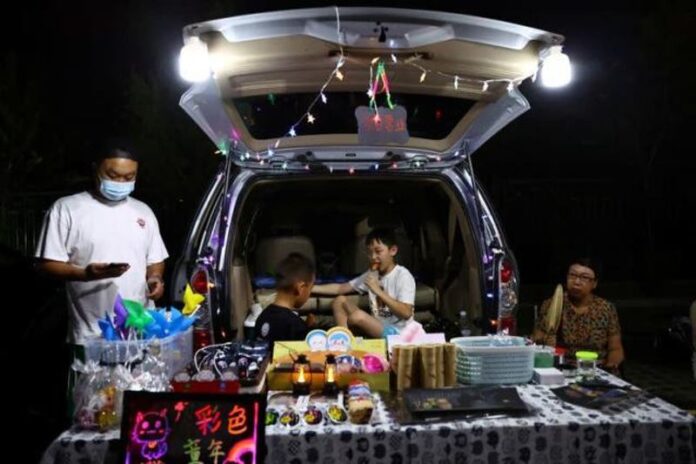 Beijing [China]: Amid the severely impacted economy, a Tianjin-based man poured his life savings of 80,000 yuan (USD 11,785) into selling coffee from the back of his green Suzuki microvan in Beijing.

China’s economy is in shambles due to the COVID-19 pandemic with many key sectors like construction and real estate bearing the brunt of the country’s stern policy to contain the virus. Since June, 40-year-old Wang Wei has driven his mobile coffee booth from car boot fair to car boot fair, offering hand-brewed coffee steeped in an assortment of liqueurs, Gulf Today reported.

Hospitality, tourism and after-school tutoring have been particularly hard hit in the country after the coronavirus pandemic.

Wang gave up a brick-and-mortar coffee shop in Tianjin in 2020 when the pandemic first hit,l as per Gulf Today.

He started running his mobile coffee booth this summer, after car boot fairs emerged in big southern cities like Chengdu, Chongqing and Guangzhou. Under a canopy extending from Wang’s van, customers relax in camping chairs, with soft lights in the evening completing the glamping experience.

“The rising popularity of this car boot sale market has helped me tide over the most difficult of times,” said Wang, as quoted by the media outlet.

Chinese Premier Li Keqiang on Tuesday said that China had reached its most difficult stage of economic stabilization and called on leaders of key provinces to coordinate efforts on economic recovery.

This comes as China’s GDP showed an unusually weak growth of just 0.4 per cent in the second quarter of 2022, according to the China National Bureau of Statistics.

“The economy continued to recover in July, but small fluctuations are still present. We are now at the most tense stage of economic stabilization, so we need to build a solid foundation for economic recovery without wasting time,” Keqiang said at a meeting with leaders of provinces of Guangdong, Jiangsu, Zhejiang, Henan, Shandong and Sichuan, as quoted by Xinhua news agency.

Keqiang said that measures to combat COVID-19 must be coordinated based on the need to rebuild the economy.

“We need to act in line with the demand that the epidemic must be stopped, the economy must be stabilized and development must be safe,” the head of the Chinese government said.

Experts say that China’s weakening growth is a result of two months of lockdown in Shanghai, tougher COVID-19 restrictions in other parts of the country and disruptions in the manufacturing, logistics and tourism sectors.

The Chinese economy expanded by an annual 4.8 per cent in the first quarter of the year.