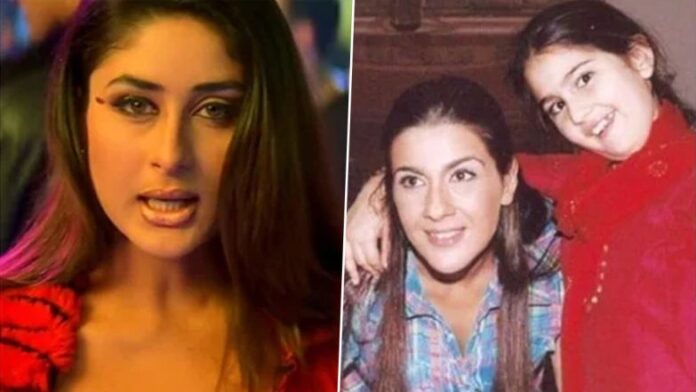 Even during several chat shows and interviews, the two have maintained that they are very much cordial with each other.

Kareena, on Thursday, appeared on Koffee With Karan’s latest episode where she shed further light on her relationship with Sara.

In fact, she even revealed that Sara’s been her fan girl ever since she was a child.

Spilling some beans on how Sara (who was a kid) had a fangirl moment during the ‘Kabhi Khushi Kabhie Gham’ trials, Kareena recalled an incident on the show. She said, “I remember at the K3G trials, she was hiding behind her mum…Amrita was like Sara wants a picture because she’s such a big fan. She loved Poo in K3G and You are my soniya so much! But I don’t understand why people discuss it so much. We are a family and like Aamir said if there is love and regard, this is it. They are Saif’s children, they are his priority.”

Speaking further on Saif’s equation with Ibrahim and Sara, Kareena added, “Sometimes we’re all together, and it’s great. Sometimes if he wants to have time alone, like a coffee or like an hour or two alone with Sara he’ll always tell me. They’ve been on holidays together. I think it’s important for them to bond. A friend just said they have everything, but they have just one father. And it’s so important for Saif also to give time to each of his children. I don’t know why it’s thought also. It’s never crossed my mind the way people discuss it. It’s not that difficult.”

Kareena appeared on the show with her ‘Laal Singh Chaddha’ co-star Aamir Khan. The two lit the show with their fiery answers and witty responses.