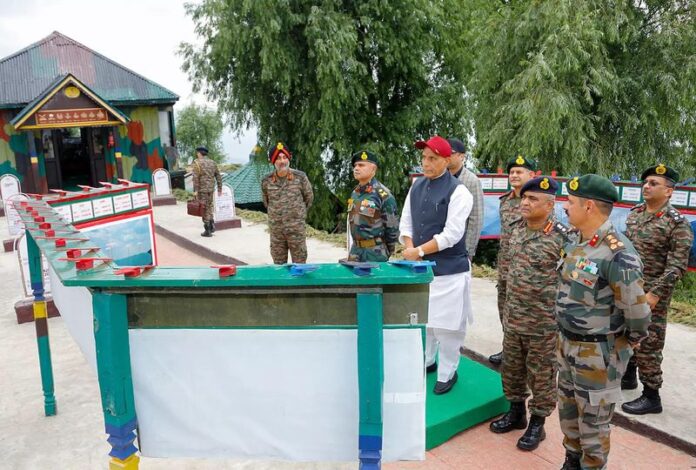 New Delhi [India]: Union Defence Minister Rajnath Singh is scheduled to visit Jammu and Kashmir on Sunday to participate in the commemoration ceremony in Jammu on Kargil Vijay Diwas.

“Tomorrow, 24th July, I shall be visiting Jammu to attend a programme commemorating ‘Kargil Vijay Diwas’. Looking forward to it,” tweeted Rajnath Singh on Saturday.

Rajnath Singh is scheduled to arrive today along with the RSS general secretary Dattatreya Hosabale, where he will address a gathering at Gulshan ground near Jammu University.

Meanwhile, preparations are also underway at the Kargil War Memorial for a three-day event. Several programs will be held in the area, attended by dignitaries from the army and civil administration as well as the gallantry awardees and their families.

Earlier on Friday, the Kargil Vijay Diwas motorcycle rally flagged off from the National War Memorial in Delhi reached Srinagar, with riders laid a wreath at the Chinar War Memorial at Badami Bagh Cantonment here to pay obeisance to the bravehearts who had made the supreme sacrifice.

The rally was flagged off by Lieutenant General BS Raju, Vice Chief of Army Staff, on July 18 from the National War Memorial in New Delhi to commemorate the saga of bravery and sacrifice of the gallant soldiers of the Indian Army in the Kargil War.

According to Srinagar-based PRO Defence Colonel Emron Musavi, the rally is travelling along two axis — Delhi-Srinagar-Zojila-Kargil-Dras, and Delhi-Chandigarh-Rohtang-Leh-Dras.