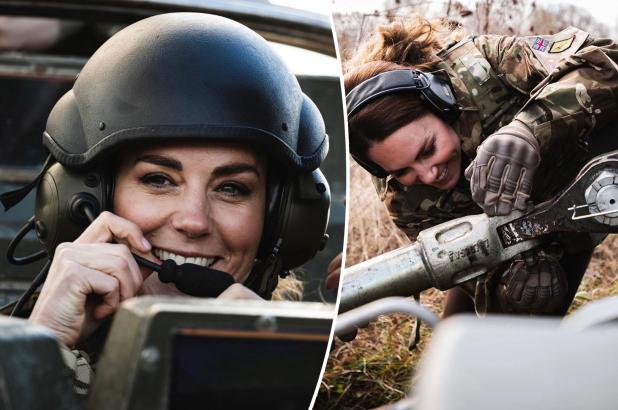 London [UK]: The Duchess of Cambridge, Kate Middleton shared some unseen pictures of herself, dressed in military wear, during her visit to a British Army training camp.

Taking to social media, the pictures went live on the official Twitter and Instagram pages of the Duke and Duchess of Cambridge, reported Page Six.

In the first picture, the Duchess could be seen leaning forward, inspecting some equipment. She was dressed in full army attire from head to toe.

In another picture, Kate donned a helmet, speaking on a mike and flashing a smile while sitting on a tank.

In the third image, Kate could be seen interacting with the armed officers, as they patiently listened to the Duchess.

Along with the string of pictures shared on social media, Kate also penned down a heartfelt message for the brave warriors, who sacrifice their lives only to keep others safe, reported Page Six.

“Today on Armed Forces Day, William and I would like to pay tribute to the brave men and women, past and present, serving in all of our armed forces, at sea, on land and in the air, here in the UK and around the world. Thank you for all you and your families sacrifice to keep us safe,” captioned the Duchess on Instagram.

Kate concluded by stating that she had a ‘wonderful’ experience witnessing the ‘important and varied roles’ the military play on a daily basis, reported Page Six.

“It was wonderful to see first-hand the many important and varied roles the military plays day in, day out to protect us all, and I look forward to discovering more about the Royal Navy and the Royal Air Force UK in due course,” signed off the Duchess.

Anne Heche Of ‘Another World’ Passes Away At 53