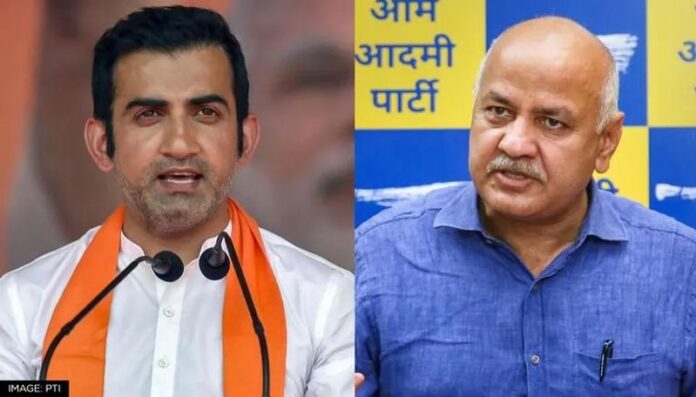 New Delhi [India]: Bharatiya Janata Party MP Gautam Gambhir on Thursday lashed out at Delhi Chief Minister Arvind Kejriwal and said that he is “playing politics” in the name of Rohingyas.

Gambhir, who is an MP from East Delhi, said, “It is very shameful that they (AAP) play this kind of politics.” Gambhir asserted that BJP’s stand to deport Rohingyas from the country has been “very clear” and rather questioned Kejriwal to clarify his stand why he mentioned of providing every facility to Rohingyas.

“Our stand, which is made by Home Minister Amit Shah on the floor of the house, has been very clear that all the Rohingyas will be deported,” he said adding that it is Kejriwal’s responsibility to “come out openly and clarify his stand that what made him write that letter where he stated that Rohingyas should be given all kinds of facilities.”

Gambhir further alleged that the AAP supremo has no concern for the nation’s security or emotions for the Delhiites.

“All he (Arvind Kejriwal) wants is the chair and I am sure he will get exposed in the upcoming years,” he added.

Reacting to the allegations of the BJP, Delhi Deputy Chief Minister Manish Sisodia alleged that the Centre is engaged in a “conspiracy” to hide the decision to resettle the Rohingyas from the Delhi government.

Sisodia claimed that neither Chief Minister Arvind Kejriwal, nor he himself had any knowledge of the move by the Centre.

“Neither the CM nor HM of Delhi had knowledge of it, we got to know through newspapers that a scheme to provide flats to Rohingyas is going on. I asked the officers and got to know some meetings did take place where Central government officers were present,” he said.

“When I asked for details of the meeting, I saw that it was mentioned in the files that for the approval by the Central government, it was being directly sent through Chief Secretary to the LG. It was completely hidden from the elected government of Delhi, why this conspiracy? Sisodia added.

The row over Rohingyas broke out yesterday after Union Minister Hardeep Singh Puri tweeted that the Rohingyas will be shifted to EWS flats equipped with basic facilities and round-the-clock security.

“India has always welcomed those who have sought refuge in the country. In a landmark decision all #Rohingya #Refugees will be shifted to EWS flats in Bakkarwala area of Delhi.

They will be provided basic amenities, UNHCR IDs and round-the-clock @DelhiPolice protection,” Puri had tweeted on Wednesday.

Earlier, reports were circulating which stated that around 1,100 Rohingyas staying in tents will be soon shifted into flats equipped with basic facilities and round-the-clock security.

This report followed the decision taken after a high-level meeting chaired by the Chief Secretary of Delhi, which was held during the last week of July, over the accommodation of Rohingya in the national capital.

In the meeting, it was emphasised that the Delhi government was bearing around Rs 7 lakh per month rent for the tents where Rohingyas were shifted in the Madanpur Khadar area after a fire incident happened in the camp where they were living.

Following the reports, the Ministry of Home Affairs on Wednesday clarified that it had not given any directions to provide EWS flats to Rohingya (illegal migrants) at Bakkarwala in New Delhi.

In the series of tweets, the HMO said the “government of Delhi proposed to shift the Rohingyas to a new location”.

“MHA has directed the GNCTD to ensure that the Rohingya who are illegal foreigners will continue at the present location as MHA has already taken up the matter of their deportation with the concerned country through MEA,” said the HMO.

It further said that “illegal foreigners are to be kept in Detention Centre till their deportation as per law”.

BJP spokesperson Gaurav Bhatia said, “Centre’s policy is clear that there will be no compromise with national security and the country’s resources are for its citizens and not for illegal migrants.”