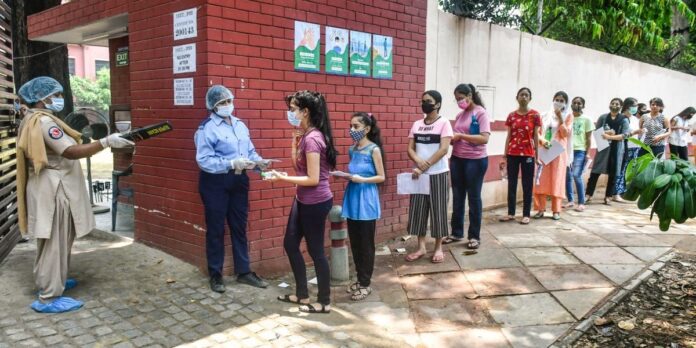 Kollam (Kerala): Kerala police on Tuesday registered a case in connection with an alleged incident in which a student was asked to remove her inner-wear before appearing for the National Eligibility Entrance Test (NEET) in the state’s Kollam district.

A case was registered under sections 354 and 509 of the Indian Penal Code at the Chadayamangalam police station under the Kollam Rural police district.

The incident came to light after a student filed a complaint with the Superintendent of Police at Kollam after the NEET exam for undergraduate medical courses on July 18,
In her complaint, the student alleged that she was asked to remove her inner-wear before entering the examination hall.

Reportedly, the parent of the student alleged that girls were forced to remove their inner-wear before being permitted to sit for the exam and they had to give the exam along with other students who were boys as well as male invigilators, which made the girls uncomfortable affected them mentally.

“My daughter has been preparing for the NEET exam since 8th grade. We were confident that she would achieve a good rank on the test but due to this issue she was unable to concentrate and couldn’t properly write the exam,” a student’s father said.

“They were very uncomfortable. The guideline issued by NTA had not mentioned any ban on bras and hooks. We were following all guidelines. But the staff did not allow them to enter the classroom without removing inner-wear,” he added.

Meanwhile, the NTA an autonomous and self-sustained testing organisation for conducting entrance examinations in a statement said that the exam centre’s superintendent, the independent observer, as well as city coordinator (NEET) of the Kollam district, did not find any such incident happening at the examination centre.

“Centre Superintendent and Independent Observer as well as City Coordinator, Kollam district have stated that they did not find any such incident happening in the NEET examination centre (Mar Thoma Institute of Information Technology, Kollam). The candidate did take the exam,” said NTA officials.

The NTA further stated that no complaint was registered during or immediately after the examination.

“There was no complaint to anyone during or immediately after the examination. As far as NTA’s Dress Code for NEET is concerned it does not permit any such activity alleged by the parent of the candidate,” it added.

Kerala higher education minister R Bindu has written to Union Education Minister Dharmendra Pradhan expressing “dismay and shock” at the news of “naked assault on the dignity and honour of the girl students” and sought strong action against the agency which forced girls to remove their undergarment before entering the test centre near Kollam.

The state’s women’s commission has also registered a suo moto case over the incident.