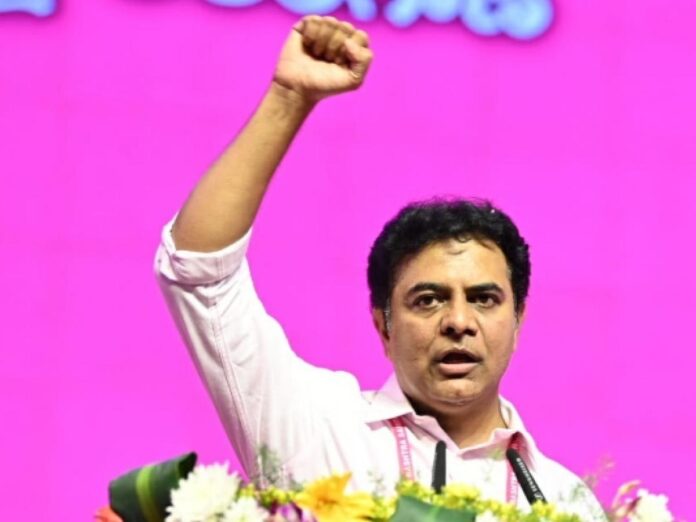 Hyderabad (Telangana): Ahead of the Bharatiya Janata Party’s (BJP) national executive meeting in Hyderabad, Telangana Rashtra Samithi (TRS) working president KT Rama Rao on Thursday said the time has come to say “bye-bye” to the Modi government at the Centre.

“The BJP will have a two-day circus. Whatever BJP is telling is all lies. One BJP leader will come to each constituency. Let them come. They should see the 24-hour electricity in Telangana. Let us talk about Rythu Bandhu and Rythu Bima. Let them see the water connections at every house. Explain all our schemes to the BJP leaders coming to the villages. They should salute the people of Telangana for their contribution to the nation,” said KTR.

He further said that BJP leaders will visit all the 119 assembly constituencies of Telangana and people should ask the BJP leaders to implement the flagship schemes of Chief Minister K Chandrasekhar Rao’s government like free electricity to farmers and others in the entire country.

KTR assured people that he will take up the responsibility of irrigating 38,000 acres in Kalvakurthi. He said the state government will soon grant new pensions to all those eligible. He said that KCR was the only Chief Minister in the country who had deposited Rs 58,000 crore in the accounts of farmers.

Prime Minister Narendra Modi is also scheduled to visit Hyderabad to attend the party’s national executive and to address a public meeting in Secunderabad.

The BJP is holding its national executive meeting at HICC Novotel on July 2-3 and the Prime Minister is scheduled to address a rally at the parade grounds on the culmination of the meeting.

Earlier, the BJP had held its national executive meeting in the city in 2004 when the party promised to carve out a separate state of Telangana without delay if it came to power.