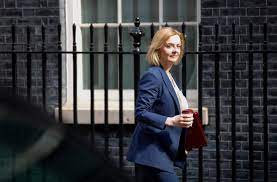 Truss, 46 is widely seen as one of the potential contenders for the leader of the Conservative Party. Notably, British Foreign Secretary Liz Truss had cut short her trip to a G20 meeting in Indonesia to return to London. Moreover, the number of candidates grew to 11 shortly after her announcement as MP Rehman Chishti followed suit with his own candidacy.

Johnson resigned on Thursday following a dramatic cabinet revolt over his scandal-hit leadership, but he will stay on as caretaker prime minister until a new Tory leader is elected.

However, Johnson could continue to remain in office until October when the Conservative party meets for its annual conference so that his replacement is found. Conventionally, when a Conservative leader resigns, they give the party time to hold a thorough leadership contest.

Former minister and Chancellor of the Exchequer Rishi Sunak too anounced his bid to become the next Prime Minister of Britain on Friday.