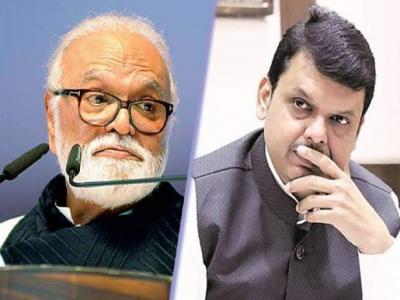 Mumbai (Maharashtra): Nationalist Congress Party (NCP) leader Chhagan Bhujbal on Sunday said it is the responsibility of Maharashtra Deputy Chief Minister Devendra Fadnavis and his government now to get OBC reservations from the Supreme Court.

Amid the high-voltage political drama in Maharashtra, NCP held a meeting at Yashwantrao Chavan Centre auditorium on Sunday to discuss further course of action. Following the meeting, Bhujbal told reporters that the issue of OBC reservations was among the agendas of the meeting.

“Discussions related to OBC reservations were done in the meeting. We have submitted reports. Now, it is Deputy Chief Minister and his government’s responsibility to get reservations from the Supreme Court,” said the NCP leader.

Asked about the Leader of the Opposition in the Maharashtra Assembly, Bhujbal said, “We are yet to decide on the name of the Opposition’s leader in the state Assembly.”
Notably, a day after forming the new government in Maharashtra, State Deputy Chief Minister Devendra Fadnavis on Friday held a meeting regarding the OBC reservation in Mantralaya in Mumbai.

In March this year, the Supreme Court declined to accept the Maharashtra State Backward Class Commission’s recommendation to restore 27 per cent reservation for Other Backward Classes (OBC) in the upcoming local body elections.

The then Maha Vikas Aghadi (MVA) government in Maharashtra decided to explore legal options for the restoration of Other Backward Classes (OBC) reservation in local bodies’ polls.

The issue was raked up by the BJP in the Maharashtra Assembly.

The new Maharashtra government, which came to power after Shiv Sena MLA Eknath Shinde’s 10-day rebellion brought the Maha Vikas Aghadi (MVA) government, will face the floor test on Monday, the second day of the special session of the state Legislative Assembly.

Earlier on Sunday evening, Maharashtra Chief Minister Eknath Shinde along with his faction of Shiv Sena MLAs held a meeting with Deputy CM Devendra Fadnavis, BJP MLAs, and other party leaders at a hotel in Mumbai to chalk out a strategy for the floor test.

Fadnavis claimed that the Shinde government will prove its majority with 166 votes.
At present, the BJP has 106 MLAs in the 288-member Maharashtra Assembly and Shinde is leading 39 rebel Shiv Sena legislators and some Independents. After the death of a Shiv Sena MLA recently, the current strength of the Assembly is reduced to 287, thus the majority mark is 144.

Shinde-led camp and the BJP scored a big win on Sunday as BJP’s Rahul Narwekar was elected as the Speaker of the Maharashtra Legislative Assembly defeating Shiv Sena candidate Rajan Salvi.

Interestingly, amid the ongoing battle between two Shiv Sena factions led by Eknath Shinde and Uddhav Thackeray, both sides issued separate whips to the party MLAs to vote in favour of their respective candidates during the speaker’s election on Sunday and later accused each other of violating them.

Shiv Sena MP Arvind Sawant, who is in the Uddhav Thackeray camp, said that 39 party MLAs did not obey their whip adding that they have sought their disqualification from the state Assembly.

However, Maharashtra Legislative Assembly Speaker Rahul Narwekar has taken on record the letter sent by Bharat Gogawale, who is Chief Whip of the Eknath Shinde-led faction. Gogawale said that 16 MLAs Shiv Sena violated the whip.

Narwekar received a total of 164 votes in support and 107 went to the
Shiv Sena candidate’s account. During the Speaker elections, 12 members were absent and 3 legislators abstained from the voting.

In the latest development, the Uddhav Thackeray faction of Sena has also started the legal process to disqualify 16 MLAs, including Shinde.