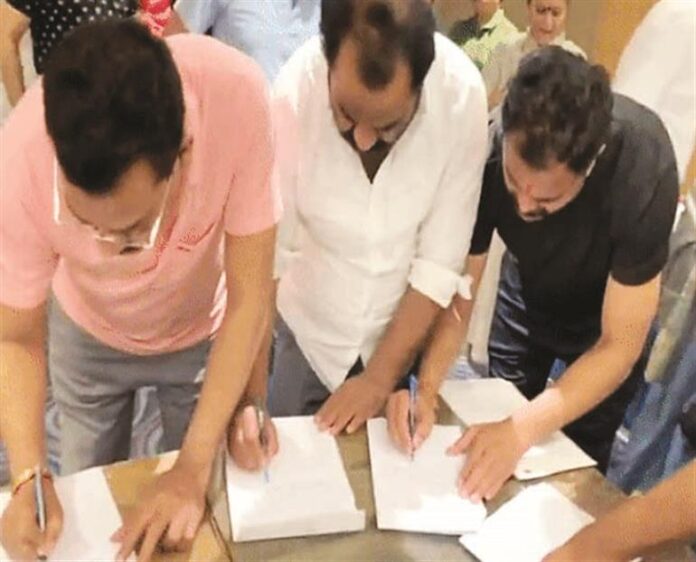 Sources further said the rebel legislators may write to Governor Bhagat Singh Koshyari seeking for floor test in the state Legislative Assembly. The 40 MLAs led by Shinde arrived at a luxury hotel in Guwahati in BJP-ruled Assam on Wednesday. The revolt in the Shiv Sena has given rise to speculations that Shinde along with other MLAs might join the BJP in a bid to topple the Maha Vikas Aghadi (MVA) government.

“A total of 40 MLAs are present here. We will carry Balasaheb Thackeray’s Hindutva,” said Shinde after arriving in Guwahati.

Shinde along with Shiv Sena and independent legislatures was staying in a hotel in Gujarat’s Surat following the cross-voting in Maharashtra Legislative Council (MLC) polls and took flight earlier today to reach Guwahati.

Before leaving for Guwahati, a video was released in which all the rebel MLAs are seen sitting together in a surat hotel. In another video, all the MLAs are seen putting their signatures on paper.

It is believed that by releasing the video, the Eknath Shinde faction demonstrated its strength with the number of MLAs.

Shiv Sena throughout Tuesday continued to say that only 10 to 15 MLAs are with Shinde however, after the video Shiv Sena leader Sanjay Raut’s claim stood false.

“The Congress president has deputed Kamal Nath AICC observer in the wake of recent political developments in the state, with immediate effect,” Congress said in an official statement.

On the other hand, when Nationalist Congress Party (NCP) chief Sharad Pawar was asked about the crisis in MVA, he termed the turmoil “an internal matter of the Sena”. Pawar also said he remains fully committed to the three-party government. He also ruled out any tie-up with the opposition BJP.

How Long Can They Hide In Guwahati, Have To Return To Chowpatty- Raut