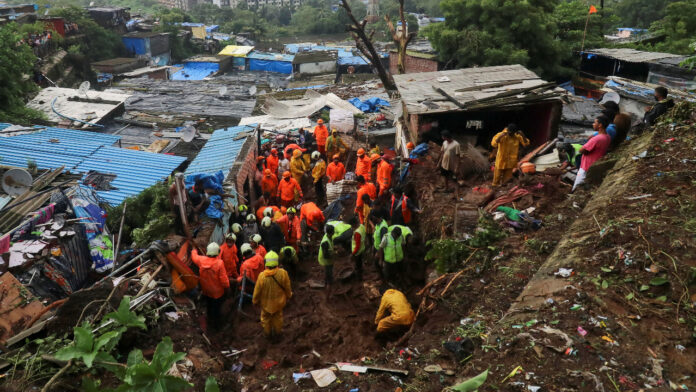 A house was badly damaged in the landslide. However, no casualties have been reported so far. “A landslide incident reported in Ghatkopar, Panchsheel Nagar in Mumbai amidst the heavy rains. Fire vehicles reaching on the spot. No casualties reported so far,” said Mumbai Fire Brigade.

The capital city is witnessing heavy rain since last night following which areas are waterlogged and traffic movement has been affected.

“In view of the incessant rains in Mumbai and waterlogging due to it, a total of 8 route diversions have been done at Sion Road no. 24 and Shell Colony, Chembur in Mumbai,” informed BEST PRO.

The Central railway informed that the trains on all corridors are running, however, some main and harbour line trains are running late.

Meanwhile, the India Meteorological Department (IMD) has also predicted moderate to heavy rain in the city and its suburbs over the next 24 hours, with a possibility of very heavy showers at isolated places.

In the wake of heavy rainfall in various parts of the state, Maharashtra Chief Minister Eknath Shinde directed officials to monitor the situation and keep the National Disaster Response Force (NDRF) squads ready, said the CM’s office (CMO) on Tuesday.

Apart from this, the Chief Minister directed the district collectors and the Water Resources Department to remain alert and take proper precautions as the water of the Jagbudi and Kajli rivers is flowing at the warning level.