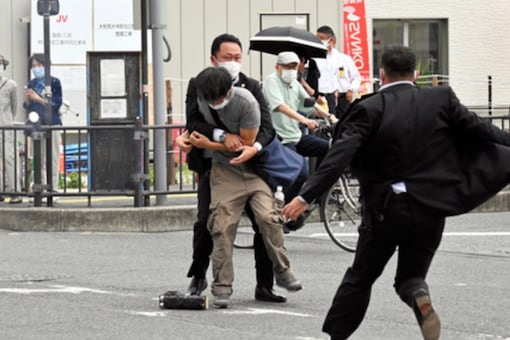 Earlier today Abe, 67, was rushed to hospital after he collapsed at 11.30 am (local time) during a campaign speech in the western Japanese city of Nara ahead of Sunday’s elections for Japan’s upper house of Parliament.

Initial media reports, citing authorities said that it appeared that Abe was shot at in the chest and described the condition of the former PM as in “cardiopulmonary arrest.”

He is scheduled to be transferred by medevac to Nara Medical University Hospital in Kashihara City in the prefecture. Local media reported that police has detained the assailant and retrieved a gun from the scene.

Japan’s public broadcaster NHK, citing police said that the suspected shooter is being held for questioning at the Nara Nishi police station and that he appears to have made the gun himself. While the police authorities were nabbing the assailant, the man did not attempt to run away.

Japanese prime minister Fumio Kishida in his live address to the country said that the condition of Abe was grave.

“This is not a forgivable act,” Kishida said adding that authorities would “take appropriate measures to handle the situation.”

After Friday’s unfortunate turn of events, a number of world leaders have shared their well wishes for Shinzo Abe.

Indian prime minister Narendra Modi said he was “deeply distressed” by the attack on his “dear friend Shinzo Abe”.

“Our thoughts and prayers are with him, his family, and the people of Japan,” tweeted PM Modi.

Shinzo Abe shares a deep bond of friendship with PM Modi which was quite evident in the meeting between both leaders in the month of May. The meeting illustrated the huge goodwill and personal chemistry of PM Modi with the former Japanese PM
US Secretary of State Antony Blinken said he was “deeply saddened.”

“I do have to say before we meet how deeply saddened and concerned we are by the news coming from Japan about the attempt on the life of Prime Minister Abe,” Blinken said.

“We don’t know his condition … Our thoughts, our prayers, are with his family, with the people of Japan. This is a very, very sad moment and we are awaiting news.”

Australian Prime Minister Anthony Albanese wrote in a Twitter post, “Shocking news from Japan that former PM Shinzo Abe has been shot – our thoughts are with his family and the people of Japan at this time.”

“PM Abe is a great and wise friend of Australia and one of the most important global leaders of the post-war era. Our prayers are with him, his wife Akie and the people of Japan at this very difficult time,” Morrison wrote.

Mexican Foreign Minister Marcelo Ebrard wrote on Twitter that he deeply regrets the shooting. “We hope that he can overcome the serious medical situation in which he finds himself,” he wrote.

Abe “was a true friend of mine and, much more importantly, America,” Trump wrote. “This is a tremendous blow to the wonderful people of Japan, who loved and admired him so much. We are all praying for Shinzo and his beautiful family!”

Japanese police said Abe appeared to have been shot from behind with a shotgun, Kyodo news agency said.

Abe was conscious and responsive while being transported to the hospital after the possible shooting, Japan’s public broadcaster NHK, said citing police sources.

Abe was campaigning on a street for Liberal Democratic Party candidate at the House of Councillors election, scheduled this Sunday when he collapsed at around 11: 30 am after people on the scene heard what sounded like a gun going off twice, local media reported.

He was prime minister of Japan twice, from 2006-07 and again from 2012-20. He was succeeded by Yoshihide Suga and later by Fumio Kishida.