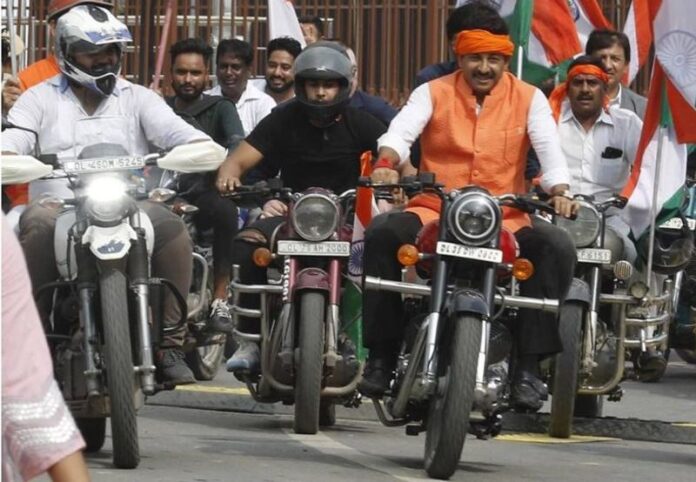 Delhi Traffic police also issued a separate challan against the vehicle owner. The challan amount to Rs 20,000. The owner of the vehicle has been prosecuted for a PUC certificate, police said. Tiwari took to Twitter to apologise and added that he will pay the fine. “Very Sorry for not wearing helmet today. I will pay the challan @dtptraffic.. clear number plate of vehicle is shown in this photo and location was Red Fort. aap sb se nivedn hai ki binaa helmett two wheeler nhii claayeN #DriveSafe family and friends need you,” he tweeted.

The central government and the BJP are celebrating 75 years of Independence with the ‘Har Ghar Tiranga’ campaign. Vice-President M Venkaiah Naidu along with Union ministers Pralhad Joshi and Piyush Goyal flagged off a Tiranga Bike Rally for MPs from Red Fort on Wednesday.

PM Modi on Sunday called upon all citizens to turn the ‘Har Ghar Tiranga’ campaign into a mass movement by hoisting or displaying the national flag at their homes and using the ‘Tiranga’ as a display picture on their social media accounts between August 2 and August 15 to commemorate the 75th anniversary of India’s Independence.

“Under the Azadi Ka Amrit Mahotsav, from the 13th to the 15th of August, a special movement – ‘Har Ghar Tiranga’ is being organized. Let us further this movement by hoisting the National Flag at our homes,” said Prime Minister Narendra Modi on Sunday while addressing the monthly radio programme ‘Mann Ki Baat’.

‘Har Ghar Tiranga’ is a campaign under the aegis of Azadi Ka Amrit Mahotsav to encourage people to bring the Tiranga home and to hoist it to mark the 75th year of India’s independence.

Azadi Ka Amrit Mahotsav is an initiative of the Government of India to celebrate and commemorate 75 years of independence and the glorious history of its people, culture and achievements.