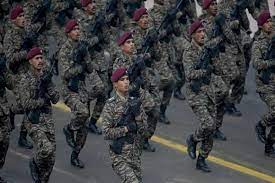 New Delhi [India]: The Central government on Thursday issued myths and facts on the ‘Agnipath’ recruitment scheme to avoid the spread of misinformation after the youth staged a protest against the scheme in several north Indian states.

In an official statement, the Ministry of Home Affairs (MHA) has answered the Myth over the future of Agniveers.

Insecure Future: It has been spread that Agniveers will have an insecure future but the fact is that the ones aspiring to be entrepreneurs, will get a financial package and bank loan scheme. The ones who desire to study further will be given a certificate equivalent to the class 12 certificate and a bridging course for further studies, whereas the ones who wish to obtain jobs will be given priority in Central Armed Police Forces (CAPFs) and the State Police. Several avenues are also being opened up for them in other sectors,” the MHA clarified.

According to the officials, in the coming years, the recruitment for Agniveers in the Armed forces will be around three times the current recruitment.

Regimental Bonding Will Be Affected: It has also been claimed that the regimental bonding will be affected but the fact is– no change is being done to the Regimental system. Rather, it will be further accentuated because the best of Agniveers will be selected, further boosting the cohesiveness of the unit.

Will Harm Effectiveness Of the Armed Forces: Another myth that prevailed is that the ‘Agnipath’ recruitment scheme will harm the effectiveness of the Armed Forces but the truth is that such a short-term enlistment system exists in most countries and hence is already tested out and has been considered ‘best practice’ for the youthful and agile army.

The numbers of Agniveers to be recruited in the first year would only make up three per cent of the armed forces. Additionally, the performance of the Agniveers will be tested before re-induction in the army after four years. Hence, Army will get only the tested and tried, and well-trained personnel for the supervisory ranks.

It was also been rumoured that people of the age of 21 years are immature and unreliable for the army, however, the fact is that most of the armies in the world depend upon their nation’s youth. At no point in time will there be more youngsters than experienced people.
The present scheme will only bring about a right mix of 50-50, slowly in a very long run, of youngsters and experienced supervisory ranks, the MHA explained.

Misinformation On Social Media: A section in social media has spread the misinformation that Agniveers will be a danger to the society and will make the youth join terrorist groups, but it is completely incorrect as a matter of fact that the aforesaid is an insult to the ethos and values of the Indian Armed Forces. Youngsters who have worn the uniform for four years will remain committed to the country for the rest of their lives. Even now, thousands who exited the armed forces have retired with skills and there has been no instance of them joining anti-national forces.

There was another myth among people that there the former armed forces officers have not been consulted but it has been clarified that extensive consultation was undertaken with the serving armed forces officer for the last two years, before implementing the scheme.

The proposal of ‘Agnipath’ has been framed by the Department of Military Officers staffed by Military officers. The department itself is a creation of this government. Many former officers have recognized the advantages of the scheme and have welcomed it.

The Union Cabinet on Tuesday approved the Agnipath recruitment scheme which provides an opportunity for Indian youth to serve in the regular cadre of the Armed Forces for a period of four years.

The scheme has been designed to enable a youthful profile of the Armed Forces and provide a fresh lease of ‘Josh’ and ‘Jazba’ whilst at the same time bringing about a transformational shift towards a more tech-savvy Armed Forces – which is indeed the need of the hour.

The selection will be the exclusive jurisdiction of the Armed Forces. A total of 46,000 Agniveers will be recruited this year.

During this period of service to the nation, the Agniveers will be imparted with various military skills and experience, discipline, physical fitness, leadership qualities, courage and patriotism.