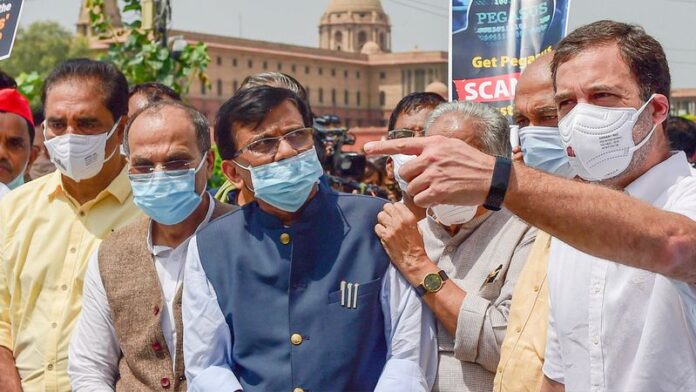 New Delhi [India]: The Congress is planning to attack the BJP-led central government over price rise and the GST issue.

Congress will hold protests against the recent hike in Goods and Services Tax (GST) rates on Tuesday in Parliament and party leader Rahul Gandhi is also likely to attend the protest.

While speaking to media persons on the GST hike, Congress Leader of Opposition in Rajya Sabha, Mallikarjun Kharge said on Monday had said that they will protest at the Gandhi statue and also inside as well as outside the House.

“We will fight it tomorrow, will protest at the Gandhi statue and also inside as well as outside the House. We have appealed to all parties to fight against price rise, GST hike,” said Kharge.

Communist Party of India (CPI) MP Binoy Viswam also criticised the Central government over the change in GST rates and said the party will fight it terming the hike “absolutely anti-people”.

“GST hike is absolutely anti-people, we will fight it,” said Viswam.

Earlier on Monday, Rahul Gandhi lashed out at the BJP and shared a graph on Twitter showing how commodities like curd, paneer, rice, wheat, barley, jaggery and honey are being taxed now. There was no tax on these items of mass consumption earlier.

“High taxes, No jobs. BJP’s masterclass on how to destroy what was once one of the world’s fastest-growing economies,” he said.

The recommendations on Goods and Services Tax rates that were made during the 47th GST Council meeting held in June came into effect from Monday.

Other items that will be dearer are printing, writing or drawing ink, knives with cutting blades, paper knives, pencil sharpeners and blades, spoons, forks, ladles, skimmers, and cake-servers. These items would now attract 18 per cent instead of 12 per cent.